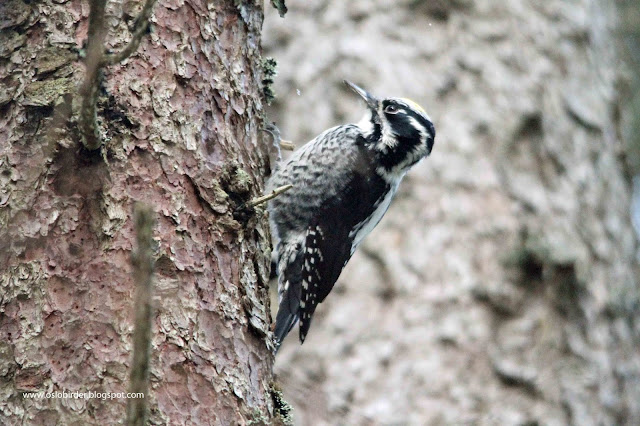 I just had to go searching for the Pine Grosbeaks again. I have really fallen in love with this area of Lillomarka. Despite being closer to the city than the areas of Nordmarka that I usually visit there are far fewer people here, the forest seems to be richer and it is also a lot easier getting around with fewer steep slopes to negotiate. The weather at the moment is perfect for searching for forest/taiga birds. There is no wind, it is cold and crisp and mostly sunny (although today a level of mist hung over the hill tops) and there is no snow meaning getting about is easy.

Despite the perfect listening conditions there is still little to hear as the density of birds is very low but when you find a flock of 10 Pine Grosbeaks and have quality time with a male Three-toed Woodpecker down to 5metres range then it is definitely a case of quality over quantity.

The Grosbeaks made me work hard but then suddenly I heard one and there they high up in a spruce only 25m away. I was able to get quite close to the tree which was on a slope and I could view the birds from nearly the same height but the light was absolutely pants! I counted a maximum of 7 birds at a time but these were all females/juveniles whereas I had also seen an adult male so knew there were at least 8 birds in the tree but when they flew out to a nearby birch there turned out to be 10 birds!

In typical Piney style they fed quietly and thoroughly in the spruce tree and were there for 20 minutes!! before flying en masse (when they made quite a lot of noise) to a birch where they fed on tiny buds. When a flock of 10 birds can feed almost silently in one tree for 20 minutes then it is clear that one needs luck combined with a slow and thorough search method to find them.

The flock of 10 birds contained only a single adult (red) male and my photos show this to be unringed and therefore not the same bird that I saw on Monday. One can wonder how many birds there are in the area.

On my way out to the Grosbeaks I had a male Three-toed Woodpecker which gave itself away by the tapping noise it made. I saw this bird quite well but the light was terrible and it was feeding high up. On my way back 2 hours later I heard it tapping again only 100m away and this time was able to see it very well. It was still dark for photography but I saw the bird at head height when it was licking sap and got so close that I managed an iPhone selfie with it.

This was definitely the closest and most prolonged meeting I have had with this species which is known to ignore people but has previously not been so confiding with me.

In Maridalen the Scaup was suddenly back in the company of a Tufted Duck. Quite incredible that they can avoid detection for so many days (last record was on Saturday).

First a video of the woodpecker which has turned out better than the photos I took (it always seem to be the case that video copes better with poor light than stills). 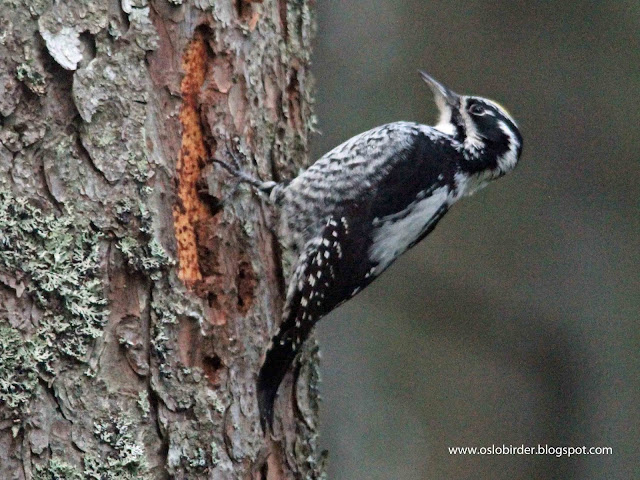 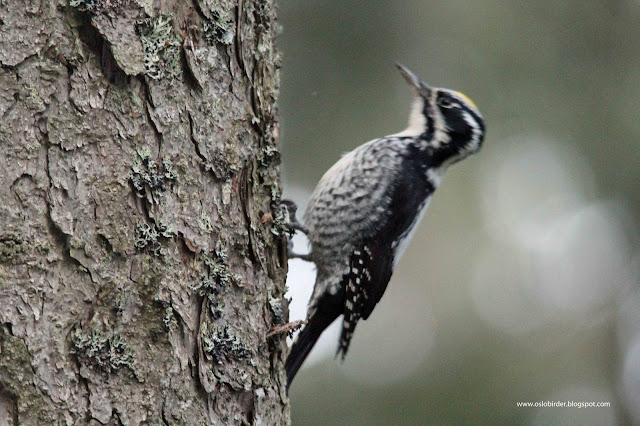 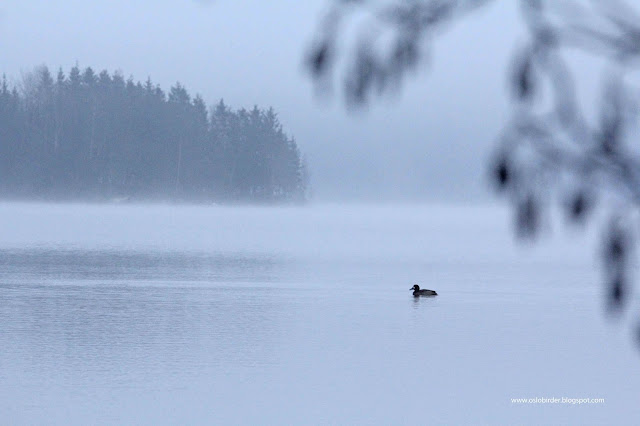 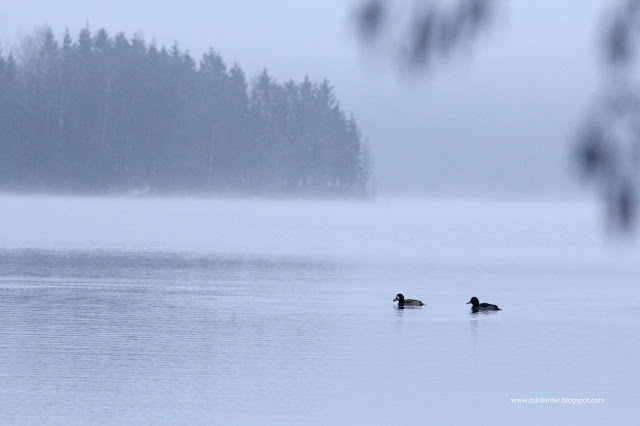