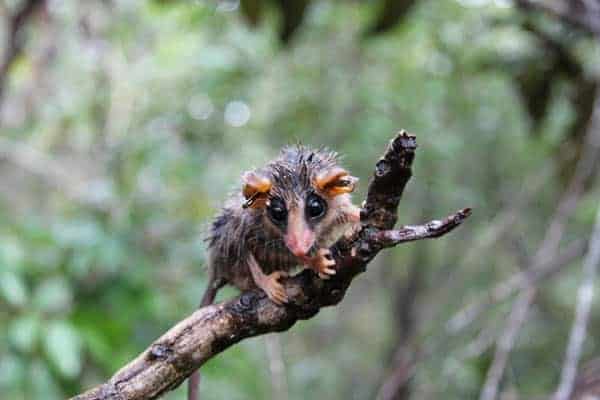 André Mendonça pops open the spring-loaded door on the shoebox-sized trap and peeks inside. Two bulging, black eyes glare back at him.

He pulls the trap off the tree limb and shakes the stunned, sopping wet creature into a clear plastic bag. “One more!” he says excitedly.

The animal, a gracile mouse opossum (Gracilinanus agilis), has a long, pointy nose, adorable pink ears, and slender hairless legs. Mendonça, a postdoctoral researcher at the University of Brasília, weighs and measures the animal, clips its ears and adds two metal tags.

Then, lets it go and watches it amble into a sapling. This little drama takes place at the Botanical Garden of Brasília, a few miles from the center of the Brazilian capital.

Preserving Brazil’s Cerrado savanna landscape, Mendonça tells me, isn’t just good for biodiversity, it’s also good for neighboring farms and farmers. A reason why: these researchers just recently learned that this little opossum species likes to feast on a local soybean pest. “If farmers maintain a natural [wooded] area next to their soy plantation,” where these animals can live, “they may not have to use as much pesticide,” he said.

That small natural history lesson is just one of many coming out of the Brazilian Long-Term Ecological Research Program (PELD Project), which is supporting nine research efforts around the country, including two in the Cerrado biome. This particular project began in 2009 and is led by Mendonça’s supervisor, mammalogist Emerson Vieira. It examines how populations of small mammals in the Cerrado region respond to factors such as food availability and wildfires.

The Cerrado boasts 92 species of small mammals, making it more species-rich than the tropical savannas of Africa or Australia. The region is primarily known for its open grassland and savanna. But the tree-climbing gracile mouse opossum lives in a woodland habitat, known as “cerradão,” which accounts for just 1 percent of the Cerrado biome. Although the amount of carbon stored in these forests pales in comparison to Amazonian forests, they represent a critical carbon hotspot in the Brazilian savanna.

Cleared Cerrado in Mato Grosso, Brazil. Since the 1960s, more than half the Cerrado forest has been cleared, making it one of Brazil’s most endangered biomes. In 2013, two-thirds of the country’s soybean harvest was grown there.


In September 2011, a wildfire swept through the botanic garden, burning patches of cerradão that had been untouched for 40 years. Unlike grassland small mammals that recover from fire within a year, the climbing opossums were devastated. Their numbers fell from about 5 individuals per hectare to zero in 2013. They’ve yet to recover, report Vieira and Mendonça in a study accepted for publication by the Journal of Mammalogy.

Vieira says the impact of wildfire on wildlife in the Cerrado is growing as the region dries out due to deforestation along streams and the conversion of land to agricultural monocrops. He has observed this transformation firsthand over the last 25 years of catching small mammals in central Brazil. “You still find the same species, but they are not as common,” he said. In the past, his team caught 7 or 8 animals for every hundred traps they put out. Today, they only capture 4 or 5 per hundred traps.

Other pressures are increasing too. Even this protected ecological reserve — the best-studied piece of the Cerrado in Brazil — is under threat from a proposed highway and residential developments.

Vieira and Mendonça hope their data can help save the gracile mouse opossum — along with the threatened cerradão woodlands. In 2013, the team discovered that the species has a special affinity for a stinkbug (Euschistus heros) responsible for up to 30 percent of soybean damage in the region during the dry season. The researchers found remains of these insects in more than 50 percent of the opossum scat samples that they examined, according to their study published in the journal Acta Theriologica.

“The insect comes to the cerradão [woodland] when the soybean is not in season,” Vieira explained, “and that’s when the opossum eats them.” He and Mendonça are now planning more focused studies to determine how well the mouse opossums control the insect pests. If the results continue to be positive, that could be one more good reason for farmers, agricultural economists and others to want to preserve the species and its habitat in central Brazil.

This article was first published by Mongabay.com on 07 Apr 2015. Subscribe to our FREE Newsletter