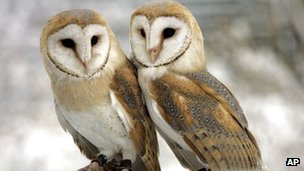 A massive increase in the number of field voles in the Trossachs is helping boost the barn owl population in the area, the national park has said.

Evidence last year indicated field vole numbers had swelled 10 times in Scotland – pushing their population into the hundreds of millions.

This was good news for barn owls, who hunt the tiny mammals.

Rangers in the Loch Lomond National Park said some of the owls had been stockpiling voles in nest boxes.

The national park started a project four years ago to increase the barn owl population in the area. Numbers of the nocturnal birds have started to decline because of changes in agricultural practices and more common use of pesticides.

There are now 40 barn owl boxes on trees and in outbuildings and barns across the park, built with the help of Mike Steward, a retired Forestry Commission ranger.

Park ranger Steven Kenney said: “Despite a very cold winter and prolonged snow cover experienced in 2010, barn owls managed to breed, producing on average 3.3 owlets per breeding pair. Twelve out of 40 boxes were used for breeding, with many others used for roosting.

“In 2010, field vole numbers were also at a peak and resulted in a phenomenon that Mike and I had never come across before.

“I was helping Mike ring the owlets with my colleague Adam Samson and found that the owls were using some of the boxes as larders to store field voles. Some of the boxes had up to 15 dead voles stored.”

He added: “Numbers are steadily increasing each year and we hope 2012 will bring even more positive results.”

It is normal for field vole numbers to peak every few years – known as a plague or outbreak – but experts believe the cold winters of 2009-10 and 2010-11 have made the last two years exceptional.

The voles thrive under snow cover as it protects them from the coldest temperatures and provides cover to prevent them being hunted by birds of prey.

However, when the snow finally melts in the spring, the mammals are suddenly very vulnerable to raptors.

The high number of field voles in the Trossachs over the past two years has also led to an increase in the number of tawny owls, researchers have said.