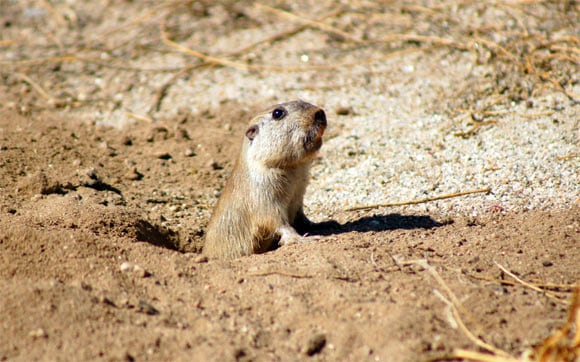 A multinational group of scientists headed by Dr Scott Gardner of the University of Nebraska-Lincoln has described four new species of burrowing rodents from the South American genus Ctenomys. Commonly called tuco-tucos, these rodents are members of the family Octodontidae, although they are sometimes classified in their own family – Ctenomyidae.

Their name is derived from the ‘tuc-tuc’ sound they make while they dig their burrows. Tuco-tucos range from 15 to 25 cm long and can weigh as little as 100 grams to more than 1 kg. They have small eyes, tiny ears, and short muscular legs with strong claws on the digits.

These animals are similar to the North American pocket gopher in both appearance and ecology. All 65 previously known tuco-tuco species are found in South America from Peru and central Brazil southward.

Their description appears in a special publication of the Museum of Texas Tech University (full text in .pdf).

The Erika’s tuco-tuco was named in honor of Dr Erika Cuellar, a Rolex award-winning conservation biologist from Bolivia.

The Yates’ tuco-tuco was named in honor of the late Dr Terry L. Yates, curator of the Mammal Division of the Museum of Southwestern Biology and later a vice president of the University of New Mexico.

The Anderson’s cujuchi was named in honor of Dr Sydney Anderson, expedition leader and curator emeritus of the Department of Mammalogy at the American Museum of Natural History.

The Lessa’s tuco-tuco was named in honor of Dr Enrique P. Lessa, an expert in Latin American mammalogy, evolution and the biology of tuco-tucos.

“The area from which these mammals were collected is still relatively unknown in a biological sense, even though this is the eastern foothills of the Andes, with among the highest level of biodiversity anywhere,” Dr Gardner said.

Scott L. Gardner et al. 2014. New Species of Ctenomys Blainville 1826 (Rodentia: Ctenomyidae) from the Lowlands and Central Valleys of Bolivia. Special Publications of the Museum of Texas Tech University, no. 62.

This article was first published by Sci-News.com on 22 Jul 2014.