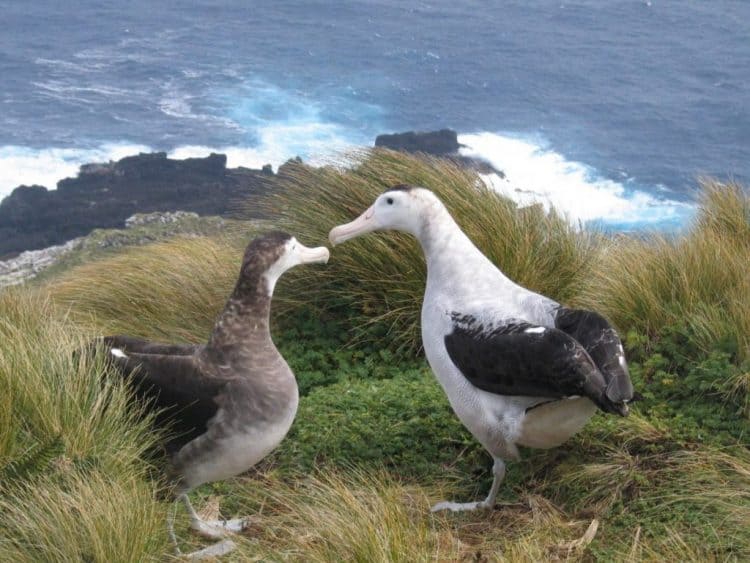 Antipodean Albatrosses court for years, mate for life and work together to raise their young – but human activity is causing a sex ratio imbalance that is destroying their lifelong romance.

This year, they have been uplisted to Endangered on the IUCN Red List due to worrying population declines.

The “live slow, die old” strategy has been working for the Antipodean AlbatrossDiomedeaantipodensisfor millennia. Breeding exclusively on a few New Zealand islands, this majestic bird mates for life, laying a single egg with each breeding attempt.

Since it takes a whole year to hatch the egg and raise the chick, they are only able to reproduce once every two years. But they don’t even start thinking about breeding until they are at least seven years old – sometimes more like twenty – and even then, the process entails a long and drawn-out courtship involving song and dance routines, and spanning over several years.

It sounds like a Jane Austen novel, but investing a lot of time and energy in safely raising a few healthy young is a strategy that has paid off – until now. Recent surveys of Adams Island and the Antipodes Islands have shown a steep decrease in population size and the number of nests found. The Antipodes Islands, which house the largest population – nearly half of the world’s Antipodean Albatrosses – are showing the biggest decline. Here, numbers have fallen by a staggering 12% a year in the past 13 years. And the overall population is estimated to have more than halved in the decade between 2004 and 2014.

What could be the reason for this catastrophic decline? There are many likely causes. Warming oceans are decreasing the albatross’ food supply, meaning that they need to travel to new areas to find food. Antipodean Albatrosses are specialists in low-energy flying, riding updrafts created by the wind and waves and covering vast distances while rarely needing to flap their wings. However, their increasingly arduous journeys are putting them in the paths of fishing boats. And that’s where the problems begin.

An army of bachelors

Antipodean Albatrosses are mainly scavengers, plucking squid and fish from the surface of the waves or plunging into the water in shallow dives. So it’s no wonder that they are attracted to fishing boats and the discarded delicacies they provide. Unfortunately, many albatrosses end up being accidentally impaled on the baited hooks of longline fisheries. In fact, in 2006 a single fishing trip in New Zealand waters ensnared 58 Antipodean Albatrosses on longline hooks.

But the impact isn’t an equal one – twice as many females are being killed as males. This is because the females are the ones who have changed their foraging range. In previous years, they remained largely around New Zealand. But tracking data since 2011 shows they have started venturing both further north and much further east to the coast of South America. This means they now overlap with a far greater number of fisheries where they are at risk of being killed.

This is creating a serious imbalance in the sex ratio of the population. With two males for every female, far fewer breeding pairs are able to form, and an army of bachelors is left over. This significantly reduces the species’ potential to raise the next generation and build up their population again – instead, further declines are predicted. In fact, if the current rate of decline continues, in 20 years’ time there will be fewer than 500 pairs left.

One up, one down

More encouragingly, another albatross species has moved the opposite direction on the IUCN Red List this year. With its imposing silhouette and severe expression, the Black-browed Albatross Thalassarche melanophris is one of the most iconic seabirds in the Southern Hemisphere. And they seem to be on the increase. On the Falkland Islands (Islas Malvinas), both aerial and land-based surveys have shown that their population has risen by 4% a year between 2005 and 2010, and Chilean populations are showing a similar improvement. And since these archipelagos hold some of the highest numbers of breeding individuals, we can be confident that the population as a whole is on the up.

But the change isn’t simple – although the overall population is increasing, on the island of South Georgia (Georgias del Sur) it has actually been declining by an estimated 1.8% a year between 2005 and 2014. This is a separate population with a different foraging range, and their situation needs to be addressed. And Black-browed Albatrosses everywhere are plagued by similar bycatch issues to their Antipodean counterparts: it was found that just one Argentinian trawl fishery was killing an estimated 13,500 Black-browed Albatrosses every year, with far more globally. So there is still much work to be done on this species.

Bycatch is a problem for the whole albatross family. An estimated 100,000 albatrosses a year of multiple species are dying as accidental bycatch in longline and trawl fisheries. But help is at hand. The Albatross Task Force, set up in 2006 and led by the RSPB (BirdLife in the UK) for the BirdLife International Partnership, has spent more than a decade working alongside fishermen to introduce measures that will prevent seabirds from getting caught in this way.

They have braved storms, seasickness and extreme climates and spent over 5,000 days at sea to build relationships with those in the fishing industry. Because fishermen don’t want to catch seabirds. In fact, seabirds actively obstruct the fishing process. One seabird can eat up to ten pieces of bait, intended for fish, before they get hooked. So the Albatross Task Force are in a perfect place to work with the fishing community to find solutions that suit everybody – the key to long-lasting and sustainable conservation.

And their heroic work is paying off. After years of lobbying by BirdLife partner Aves Argentinas, this year the Argentinian fishing authorities announced the mandatory use of bird-scaring lines on all freezer trawlers from May 2018 onwards. Thanks to the Task Force’s advocacy in Namibia, 100% of trawl and demersal longline vessels now have bird-scaring lines, which have been constructed in collaboration with local women’s group Meme Itumbapo. In South Africa, there has been a 99% reduction in albatross deaths in the hake demersal trawl fishery following the introduction of similar measures.

Overall, nine out of the ten fisheries originally pinpointed as bycatch hotspots have now committed to adopting regulations to protect seabirds, and the Task Force’s work continues in earnest.

The start of something great

It’s not all plain sailing – in 2016, 39 albatrosses were killed in a commercial tuna fishing venture off the West Coast of New Zealand due to the skipper’s (illegal) failure to use bird scaring lines. And it’s not just bycatch that we need to worry about. This July, a survey by Auckland Museum and the University of Tasmania discovered that over a third of seabirds found dead on Australia and New Zealand’s beaches had eaten plastic.

Invasive species are also a big problem – back in the world of the Antipodean Albatross, Auckland Island pigs are thought to have been responsible for almost extirpating the bird from this island.

So there’s a long way to go: 15 out of the world’s 22 albatross species are still globally threatened. But the Albatross Task Force has shown us what it’s possible to achieve, and with enough support, in the coming years we can take these successes to a new level.

We hope that, some day, all the sad stories will once again be replaced with epic romances.

This article was first published by BirdLife International on 22 Dec 2017.