The first book providing spectacular photographs and an insight into the lives and behaviour of ALL 13 species of otters has now been launched.

It contains detailed information about the magnificent Giant Otter of the Amazon, the tiny Asian Small-Clawed Otter so often found in zoos, the Sea Otter with its charming habits of cracking shellfish on a favourite stone resting on the stomach, and the Eurasian Otter found in the UK.

In addition, there are unique photos of the rare Hairy-Nosed Otter of south-east Asia – this species is so rare that there is only one animal in captivity in Phnom Penh, Cambodia.

Otters are also found in Africa and the book explains the problems faced by species such as the Congo Clawless Otter.

The authors, Paul and Grace Yoxon, who set-up the International Otter Survival Fund (IOSF) over 20 years ago, share in the book their vast experience of this elusive and enigmatic animal.

Beautifully illustrated with first class images, Otters of the World provides information on identification, ecology, threats, and outlines the important role the otter plays in conservation.

It is hoped that the book will increase public awareness of the work of the IOSF, and more importantly, bring to the fore the plight of otters in many countries, some of which are on the verge of extinction.

Each otter species is listed in the IUCN Red Data List – with the illegal wildlife trade in otters, for fur and body parts and the pet trade, being the biggest the threat of extinction.

In 1998, it was thought that the Hairy-Nosed Otter was extinct, but with an initiative driven by the IOSF, a survey was conducted in Thailand, where a small population was actually discovered.

Since then reports have been received by the IOSF of small (and fragile) populations in Vietnam, Cambodia, Malaysia and Indonesia.

Then, in August 2012, the Japanese Ministry of the Environment declared the otter extinct, and they are now exploring reintroduction.

The Japanese otter was believed to be either a subspecies of the Eurasian otter or possibly even a separate species – Lutra lutra whiteleyi or Lutra nippon.

The IOSF has been asked to assist with the feasibility study in Japan, reintroducing otters on to Hokkaido island, in north Japan, and have recently returned from attending the first workshop at the Shiretoko National Park, which is a UNESCO World Heritage Site. 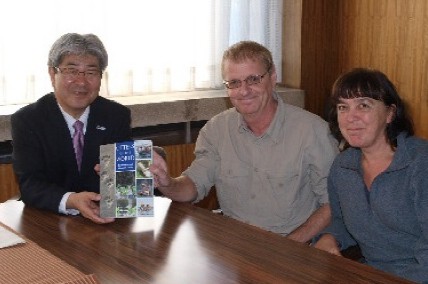 During their time in Japan, Grace and Paul presented a copy of the new book to Baba Takashi, Mayor of Shari Town, Hokkaido .

In order to forge ahead with this invaluable work, the IOSF continually needs to raise funds – sales from this new and exciting book will support this.

Paul Yoxon said “The otter is so often overlooked by governments and conservation organisations as the focus is almost always on the higher profile species such as elephants and tigers.

And yet for every tiger skin found there are at least 10 otter skins, and the illegal trade has already had a serious impact on otter populations of Asia.

But there are other threats to otters, such as roads and habitat destruction and they are nearly all caused by man.

We hope this book will captivate and draw more attention to otters and how we all need to work together to save them.

Otters of the World – an introduction to the magical world of otters, with many photos, distribution maps, and more.

Available direct from the IOSF Ottershop or from Amazon on this link.