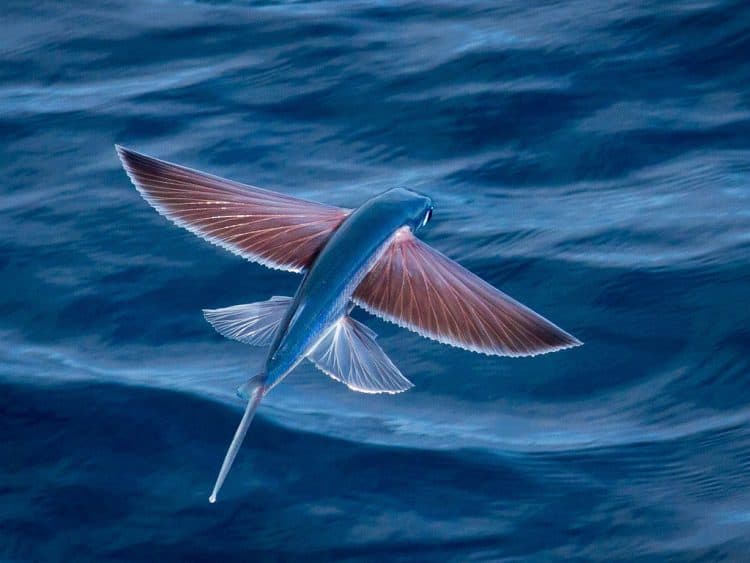 These truly spectacular chase scenes were filmed for “Hunger at Sea”, an episode of the BBC nature documentary series The Hunt.

As the mahi-mahi (also known as dorado) race after the schools of fish, frigate birds circle above, waiting for their “winged” prey to break through the surface in a bid to escape. Thanks to specialised fins, the fish are able to glide for considerable distances above the water, where the birds can scoop them up with their hooked beaks.

The frigate birds are specialist flying-fish hunters. Since they lack waterproof plumage, they can’t safely land on the water’s surface (and their short, weak feet aren’t designed for at-sea takeoff) – and that makes the airborne fish the perfect meal (they’re also not above stealing another seabird’s catch).

The birds are often to be found loitering in the air when marine predators like tuna, dolphin and mahi-mahi are at work. Thanks to excellent eyesight and soaring flight, can they easily spot the telltale splashes of an underwater hunt.

As the mahi-mahi power through their high-speed chase (swimming at speeds of up to 92kmph, or 58mph!), some flying fish evade capture and leap into the air to escape – where the frigate birds are just waiting to seize the moment.

This article was first published by Earth Touch News on 24 Nov 2015.