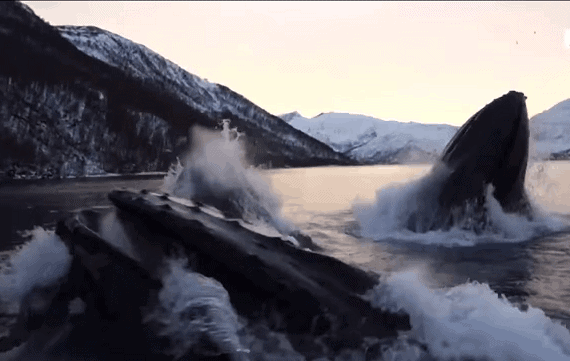 Each year, thousands of people embark on whale watching tours in hope of spotting the majestic humpback whale in the wild.

These baleen whales—who engage in lively leaps and flips, enhanced by their thin flippers and blue-back coloration—can put on quite the show for onlookers, but there is something extra special about encountering these marine mammals when it’s unexpected.

Earlier this month, two lucky Norwegian boaters were in the right place at the right time for an incredible encounter with humpback whales.

In a video released last week, the duo can be seen casually boating in a Norwegian fjord when schools of herring start leaping from the water—signs that they’re being chased by humpback whales.

Seemingly out of nowhere, several humpback whales burst from the water as they leap for their tasty meal—a move so sudden and powerful that it’s bound to leave any viewer in awe.

Fortunately, the Norwegians told a local news source that they knew the school of herring—clumped together by bubbles and pulses from the whales—signaled that humpback whales were nearby, and they turned off their boat engine in an effort to not disturb the whales, they told a local news source. And, that gave them just enough time to get their camera ready and capture the incredible event for the rest of us to see.

Humpback whales are distributed across the world’s oceans, except for extreme northern and southern waters. They can grow to a staggering 40 to 50 feet in length, weighing up to about 30 tons. They mostly feed along coastlines, trapping their prey, like fish or krill, by lunging upward from the water column and “bubble-netting,” where several whales surround prey and pulse air bubles to concentrate them. Humpback whale populations are recovering after being decimated by commercial whaling, but are still threatened by vessel strikes, entanglement in fishing gear, habitat degradation and ongoing harvests. They are listed as endangered under the Endangered Species Act, though two populations are under review for delisting.

Take a look below for an unprecedented look at humpback whales:

This article was first published by Oceana.org on 19 Nov 2014.