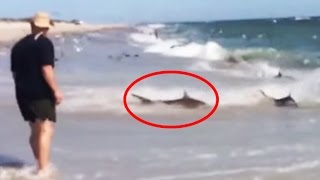 A video posted on YouTube shows as many as a hundred sharks devouring a school of bluefish near a beach, a rarely seen phenomenon.

The sharks are so focused on their meal that several wash up on the sand, putting their lives in danger, a scientist says.

According to the YouTube posting, the video was shot in North Carolina’s Outer Banks by Donnie Griggs, an avid fisherman, diver, and surfer. The footage was reportedly taken on October 9 around noon, along the Cape Lookout National Seashore.

Sharks commonly feed in groups on small fish known as baitfish, but the behavior normally takes place hundreds of feet or more offshore, Gregory Skomal, a senior fisheries biologist who studies sharks for the state of Massachusetts, told National Geographic.

“I haven’t seen sharks feeding right on the shoreline before, with sharks being thrown up into the intertidal zone,” says Skomal. “I think it’s pretty rare.”

According to Griggs’s posting, the sharks were chasing bluefish. That’s plausible, says Skomal, who adds that they were probably young fish called snapper blues, which are no more than eight inches (20 centimeters) long.

The sharks in the video are “risking their lives” by swimming so far up the beach, where they could get stuck, Skomal says.

“They are so ravenous that they are only thinking about feeding,” he says. “It’s remarkable.”

Skomal says it’s difficult to determine the species of the sharks because of the resolution of the video. But he suspects they may be blacktip sharks, or possibly sandbar sharks.

Skomal notes that such a large number of gulls and pelicans is typical around feeding balls. Predatory fish such as sharks and tuna often drive smaller baitfish toward the surface, where they’re then picked off by birds.

“A lot of fishermen learn that if you want to find fish, look for birds,” he says.

As to why the sharks feed together, Skomal says scientists aren’t sure if they are actively working together to hunt or if they just happen to be in the same place at the same time, “sort of like how you find more hungry people in a restaurant than in an alley, because that’s where the food is.”

Whether coordinated or not, the presence of so many sharks may drive fish together, making them easier to catch.

In a bid to reassure beachgoers, Brian Recker, who uploaded Griggs’s video to YouTube, wrote, “We want it to be clear that Cape Lookout and the surrounding beaches of Eastern North Carolina are extremely safe for swimming. The presence of these sharks and large schools of fish is actually a sign of a very healthy ecosystem.”

This article was first published by National Geographic on 15 Oct 2014.