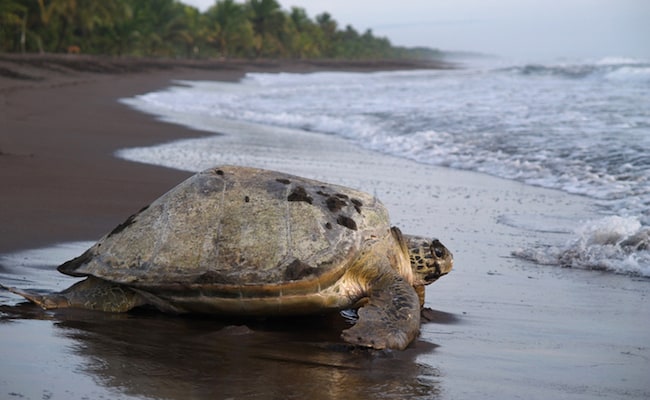 Given that turtles have been around about 220 million years and even outlasted the dinosaurs, a lot of people assume that we have nothing to worry about when it comes to turtles’ continued longevity. Sadly, that’s not the case.

On the contrary, turtles are one of the most vulnerable vertebrate creatures on the planet at this point, dwindling faster than mammals, fish, birds and amphibians. Sixty-one percent of the 356 turtle species (known to man, anyway) are currently classified threatened, endangered or, in some cases, already extinct. The declining population can largely be attributed to the usual suspects: climate change, loss of habitat and disease.

Scientists from government and academic institutions around the country teamed up to study this issue, not just to warn people about the shaky status of turtles, but also what would be lost if turtles were to disappear from the planet.

It turns out that turtles have a lot of utility to the larger ecosystem that aren’t necessarily common knowledge. Among some of turtles’ major contributions:

Scientists have identified dozens of plant species that count on turtles disseminating their seeds. Turtles’ role is often pivotal, not just incidental. In the case of some plants, turtles are the primary mode by which seeds are spread to other areas. Turtles are particularly “talented,” if you will, at helping plants to sprout since their digestive tracts are gentler on the seeds than what other animals can provide after pooping out the seeds.

2. BUILDING HABITATS FOR OTHERS

Many turtle species are known for digging holes, both large and small. Although turtles have their own reasons for digging, invariably other species jump in to benefit from these spaces. For example, plants that normally have difficulty in certain regions have an easier time in the dug out soil created from the holes. Then there are the hundreds of animal species (insects, reptiles and even mammals like foxes and bobcats) that utilize these holes as their own habitats. Without these turtles doing the real labor, many of these creatures wouldn’t have such nice homes.

3. BEING A KEY COG ON THE FOODCHAIN

Researchers see turtles as an important component to the harmony of an ecosystem because their diets differ depending on the environment and the needs of that particular place. Depending on the region, turtles will eat plants or meat or both in order to help keep the balance in check. In turn, turtles and their eggs are desirable food for the larger animals of the area. Removing turtles could throw the whole chain out of whack.

“These modern descendants of ancient lineage are touchstones for how human influences are causing the decline of so much of the world’s wildlife,” said ecologist Whit Gibbons who collaborated on this project. “Our hope is that everyone will be encouraged to engage in concerted efforts to conserve their well-earned legacy as part of our natural habitats.”

Indeed, let’s be part of that concerted effort. If turtles can last hundreds of millions of years only to have humans jeopardize their survival, we have an obligation to do our part to safeguard them. Start by signing this petition to protect sea turtles.