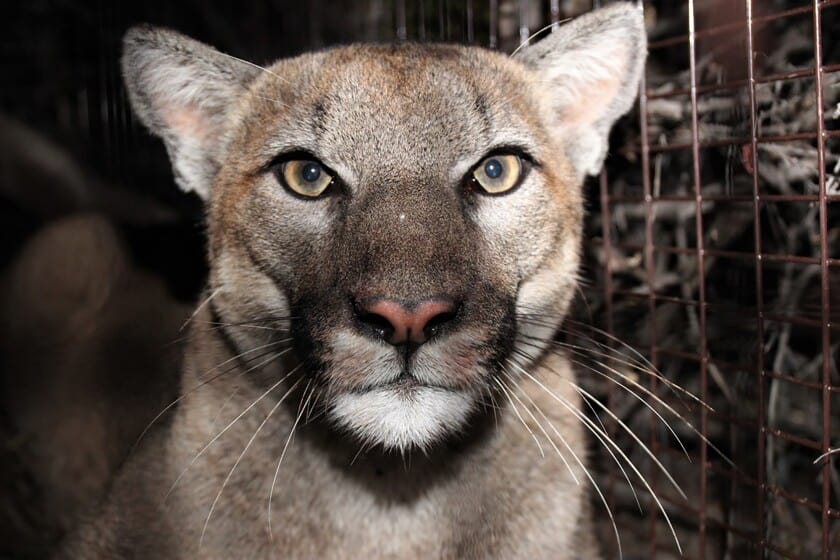 For the year that researchers tracked the young male mountain lion P-78, the cat relentlessly prowled the Los Angeles area for a home range to call his own. After being collared with a GPS tracking device in December 2019, he traveled west to Point Mugu in Ventura County, then north across the 101 Freeway before starting an eastward trek that proved him an adept freeway crosser. He traversed the 23 Freeway into the Simi Hills and then crossed the 118 Freeway into the Santa Susana Mountains before, most likely, following the path of the Santa Clara River under the 5 Freeway. He ventured into the Angeles National Forest but — to the surprise of his trackers — left and headed under the 5, again, this time west to the Santa Susanas, where researchers changed his GPS collar in November. They found him hearty and well fed, the remnants of his kill of deer and raccoon close by.

The next month he was dead. Researchers got a “mortality” signal — meaning the cat hadn’t moved in hours — on Dec. 26. P-78’s luck evading traffic ended near the San Francisquito Creek in Valencia. Researchers found his body there and assume he was hit by a car on a nearby road. A necropsy followed. The National Park Service didn’t announce his death until Wednesday, on Twitter.

P-78’s remains were a case study in the perils of being a mountain lion in a wilderness fragmented by urban sprawl. The hit fractured his front leg in multiple places and led to his death. (The cat’s swollen leg indicated he lived for a while after he was hit.) But the necropsy revealed a cocktail of five anticoagulant rodenticides — rat poison — in his system. Three of them were the second-generation anticoagulants that are severely toxic to wildlife. Numerous studies on California wildlife show that rodenticides have widely poisoned, and sometimes killed, mountain lions and other animals. Happily, the state slapped a moratorium this year on the use of second-generation rodenticides, except on farms and in some other settings.

Since the National Park Service began collaring and studying mountain lions in and around the Santa Monica Mountains in 2002, six cats’ deaths have been attributed to some kind of rat poison in their system. A total of 27 out of 28 of the study lions that were tested for rat poison had tested positive for one or more of the anticoagulant rodenticides as of January. P-78 can now be added to that longer list.

Of the 96 cats that have been collared and tracked, P-78 is the seventh to die from a car hit. Hemmed in by freeways and development, lions have difficulty traveling far enough to find mates genetically diverse enough to ensure a healthy population.

There are 11 adult or subadult lions remaining in the park service’s study, most notably Griffith Park’s famous P-22. Their existence shows that a metropolis can be an amazing blend of urban neighborhoods and wildlife. But P-78’s death is a reminder that lions need some safeguards to survive and flourish genetically.

Building more wildlife crossings and ridding the ecosystem of dangerous rodenticides will help. It’s also encouraging that the California Fish and Game Commission is formally studying whether certain lion populations should be granted protection under the state’s Endangered Species Act.

In addition to those adults, a bumper crop of lion kittens — 13 — was born last year. (No, researchers don’t think it has anything to do with the pandemic.) In a sign of progress for the population, all appear to be doing well.

This article was first published by The Los Angeles Times on 4 April 2021. Lead Image: P-78, a subadult male mountain lion, was captured in the central portion of the Santa Monica Mountains on Dec. 11, 2019. (National Park Service).