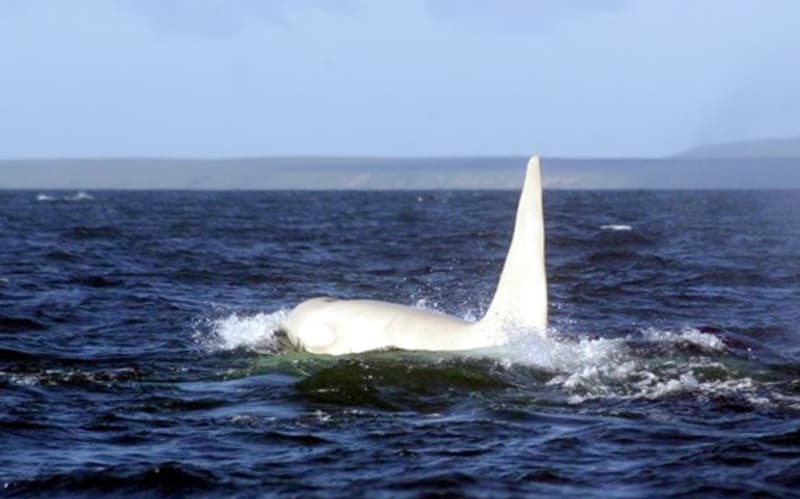 Scientists have made what they believe to be the first sighting of an adult white orca, or killer whale. The adult male, which they have nicknamed Iceberg, was spotted off the coast of Kamchatka in eastern Russia. It appears to be healthy and leading a normal life in its pod.

White whales of various species are occasionally seen; but the only known white orcas have been young, including one with a rare genetic condition that died in a Canadian aquarium in 1972.

The sightings were made during a research cruise off Kamchatka by a group of Russian scientists and students, co-led by Erich Hoyt, the long-time orca scientist, conservationist and author who is now a senior research fellow with the Whale and Dolphin Conservation Society (WDCS).

“We’ve seen another two white orcas in Russia but they’ve been young, whereas this is the first time we’ve seen a mature adult,” he told BBC News. “It has the full two-metre-high dorsal fin of a mature male, which means it’s at least 16 years old – in fact the fin is somewhat ragged, so it might be a bit older.”

Orcas mature around the age of 15, and males can live to 50 or 60 years old, though 30 is more commonplace. “Iceberg seems to be fully socialised; we know that these fish-eating orcas stay with their mothers for life, and as far as we can see he’s right behind his mother with presumably his brothers next to him,” said Dr Hoyt.

The cause of his unusual pigmentation is not known. The captive white orca, Chima, suffered from Chediak-Higashi syndrome, a genetic condition that causes partial albinism as well as a number of medical complications. It is possible that an attempt may be made to take a biopsy from Iceberg; but with researchers reluctant to do so unless there is a compelling conservation reason, they are hoping instead for closer observations including a detection of eye colour.

The project Dr Hoyt co-leads, the Far East Russia Orca Project, has pioneered visual and acoustic monitoring in the inhospitable Kamchatka seas, and has produced a number of papers on the communication of killer whales. This may lead to improved understanding of the animals’ complex social structure, which includes matrilineal family clans, pods consisting of several families, and much larger “super-pods”.

A related project aims to study and conserve habitat for all whales and dolphins around the Russian coast. In recent years a white humpback whale nick-named Migaloo has drawn intense interest in Australia, while the Arctic beluga is naturally white. The most famous white whale, though, is the fictional sperm whale that drove Captain Ahab to his eventually fatal fury in Moby Dick.

That's great that he's been found! Now let's not let him be captured!! ££$$$ signs in lots of despicable humans eyes!