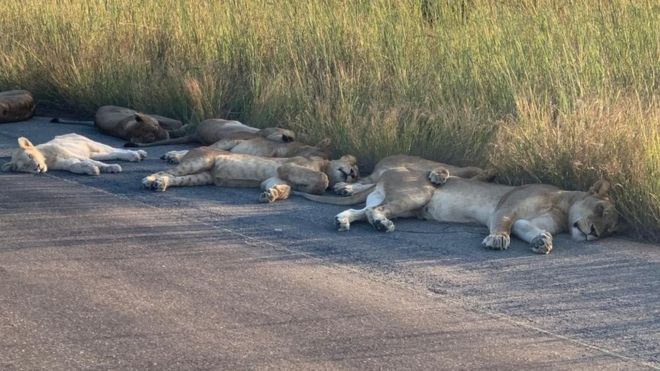 Lions and other wild animals have been taking advantage of the peace and quiet in South Africa’s vast Kruger national park as the country’s strict lockdown continues.

On Thursday, park ranger Richard Sowry took photographs of a pride of at least eight lions, including a few young cubs, snoozing on the tarmac just outside one of the park’s rest lodges.

Kruger media officer Isaac Phaala told the BBC the lions would normally be in the bushes but that they were “very smart and now they are enjoying the freedom of the park without us”.

The lions liked the road because it was dry, Phaala said.

In a Twitter post, the park explained that the pride was not usually resident in areas of the park open to tourists – let alone accustomed enough to cars to generally sleep in the middle of the road near a busy exit and entrance.

Earlier in the week, Jean Rossouw, captain of the Skukuza golf club located within the park, captured early-morning videos and images of lions and hyenas on the green. Lionesses stopped to drink from ponds on the course, eyed and chased hyenas.

But not everything has been rosy for the residents of other parks in the country. In March, the New York Times reported that rhino poachers were taking advantage of the lack of people to poach in what were normally tourist hotspots.

In the country’s Northwest Province, bordering Botswana, nine Rhinos had been poached between the start of the lockdown on 23 March and 8 April. Wildlife conservation organisations fear their funding will be severely affected by the drop in tourism.

But in a well-timed victory for Kruger – which is roughly the size of Israel or Wales – on 21 March, before the lockdown came into effect, four suspected Rhino poachers were arrested at the park, South Africa’s Sunday Times newspaper reported.