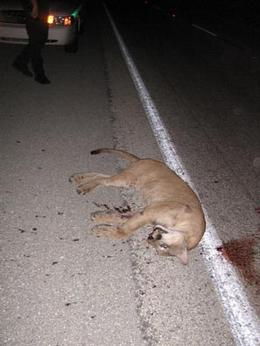 Florida panthers are off to a rough start in 2012, with three deaths documented by the Florida Fish and Wildlife Conservation Commission (FWC). Already, in just the first week of 2012, there were two documented deaths of panthers hit by vehicles on highways in Collier County, where the greatest concentration of panthers in the state is found. The third fatality was caused by a fight with another panther.

100-160 panthers alive
Today, an estimated 100 to 160 adults of this federally endangered species live in Florida. Panthers almost disappeared from the wild in this state when their numbers fell to fewer than 30 in the 1970s. Since then, their population has been increasing.

Vehicle collisions top cause of mortality
Collisions with vehicles continues to be the greatest source of human-caused mortality to this long-tailed cat that can weigh up to 160 pounds and grow to 6 feet or longer.

“Florida panther deaths are most often the result of one of two things: collisions with vehicles or aggression from other panthers,” said Kipp Frohlich, head of the Imperiled Species Management Section at the FWC. “We can’t control panthers fighting when they are defending their territory; that is a part of nature. But we can do something about human-caused panther mortalities.”

“People who slow down and drive carefully in rural areas, especially where panther crossings are identified, can make a difference in conservation of this endangered species. It is especially important to slow down and keep a careful lookout at dawn or dusk, when panthers are most likely to be on the move,” Frohlich said.

The FWC continues to work with many partners to conserve and increase habitat available to panthers on both public and private lands. This is a critical step to ensuring the survival of panthers, the official state animal of Florida.

Report sightings
People are encouraged to report sightings of an injured or dead panther by calling the FWC’s Wildlife Alert Hotline at 888-404-FWCC (3922) or #FWC or *FWC on a cell phone. Another option is texting [email protected] (standard usage fees may apply).