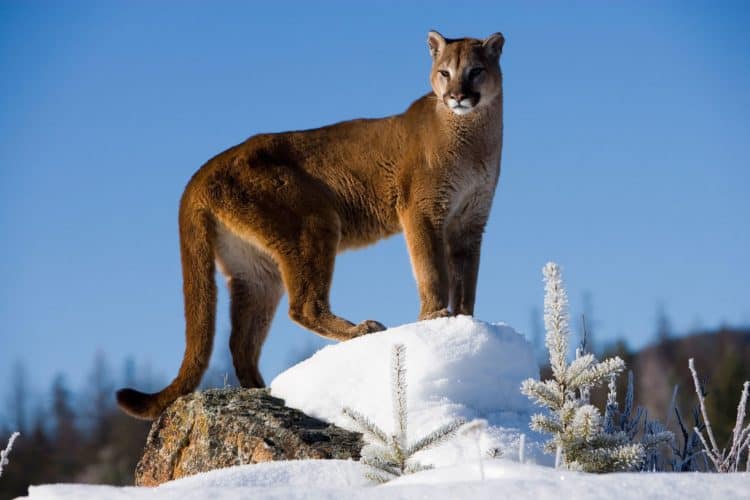 A new video we’ve released blows the lid off of a dirty secret, that America’s iconic mountain lions are being killed at unsustainably high numbers for nothing more than trophies.

In our video, you can learn from leading scientists about the myths behind trophy hunting of mountain lions and why we must stop it.

The threat is very real. For example, Utah wildlife officials are currently considering a proposal to kill up to 678 mountain lions.

While the state does not have a current population estimate, previous research suggests the population could number between 1,500 to 2,500 independent-age mountain lions statewide, meaning the proposed quota could allow for the killing of a staggering 40% of Utah’s entire mountain lion population, excluding kittens still with their mothers.

This figure doesn’t even include the area where unlimited lion hunting is already permitted. This level of killing is not sound wildlife management and will wreak havoc on Utah’s mountain lion population.

Mountain lions are not killed for food, and in most states, they’re hunted down with packs of hounds with GPS-tracking radio collars.

Trophy hunters often spend thousands of dollars on a professional guide to help them track down and kill a mountain lion. The guide and hunter arrive to find that the dogs have treed their target, who is shot at point blank range.

In all states but Washington, wildlife agencies set indulgent quotas to maximize hunting opportunities and keep mountain lion populations low. Worse, they hang their management hats on myths that have been disproven in peer-reviewed studies and science.

For example, wildlife managers often justify trophy hunting to prevent the loss of livestock by mountain lions. However, federal data proves that mountain lions are responsible for a miniscule percentage of livestock losses. This same data shows that very few livestock operators use proven non-lethal methods, instead relying on state and federal tax dollars to reimburse them for livestock losses blamed on native carnivores living near ranches and grazing grounds.

Trophy hunting takes a terrible toll on mountain lions, and this strategy of heavy-handed management is harmful to their survival. While rare on the landscape, mountain lions are vital to their habitats, increasing biodiversity and ensuring the health of entire ecosystems.

Mother lions spend upwards of two years raising their kittens, and if kittens lose their mothers at the hands of trophy hunters, they too may die from causes such as starvation and predation. Furthermore, disrupting the sensitive social structure of mountain lions results in increased conflicts with humans, pets and livestock.

We are working with native carnivore researchers to provide the best available science to wildlife decision makers, science that strengthens the case against the trophy hunting of mountain lions. But we need your help in this effort.

Please speak up and engage with wildlife agencies in your state, telling them you no longer want to see mountain lions killed as trophies. Utahans can comment on the proposed quota and attend the Wildlife Board meeting in Salt Lake City this month.

This article was first published by The Humane Society on 13 August 2019.