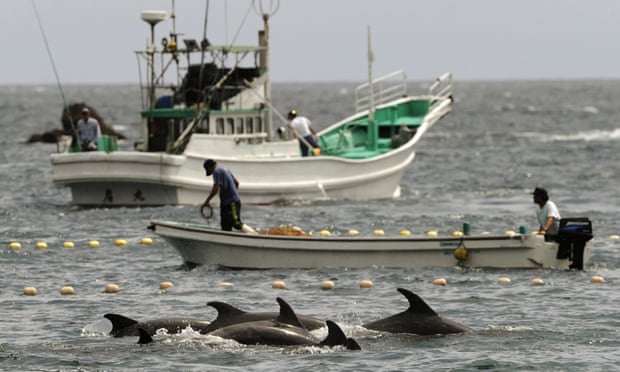 A first-of-its-kind lawsuit filed in Japan will attempt to stop the horrific annual dolphin slaughter that was the subject of the 2009 Academy Award winning documentary “The Cove.”

The UK organization Action for Dolphins and Japan’s Life Investigation Agency filed the lawsuit on February 13, 2019. And the groups are taking a new approach: using Japanese law rather than international law to stop “drive hunting” as a method of killing and capturing dolphins and other cetaceans.

You see, dolphins are small whales, not fish. Yet that’s how Japan classifies them — as fish.

While the International Whaling Commission has banned commercial whaling, there’s been no universal agreement among IWC countries regarding whether that ban necessarily includes smaller cetaceans like dolphins.

Without a strong consensus on this point and lacking a way to enforce the law, attempts to invoke international law haven’t worked. This is true even where large whales are concerned. Japanese fishermen just keep hunting.

“Dolphins are mistakenly viewed as ‘fish’ in Japan, and therefore domestic laws protecting mammals from cruelty have not been applied to them,” Sarah Lucas, chief executive of Action for Dolphins, told The Guardian.

But this lawsuit does what none others have tried. It asserts that dolphin “drive hunting” violates Japanese animal protection law.Dolphins and other cetaceans are demonstrably not fish; they are mammals. If Japan’s animal protection laws apply to mammals, this may be the legal action that actually works.

Should a Japanese court agree with the suit’s premise, the government of Japan will be hard pressed to refuse to enforce its own law.

“Many Japanese see dolphins as fish and mistakenly believe the animal welfare act does not apply to them,” Ren Yabuki, head of Life Investigation Agency, told the Japan Times. “I’ve seen many times that half-killed dolphins are taken away on small boats, thrashing about in pain.”

WHAT IS DRIVE HUNTING?

Every year, from September to March, Japanese fishermen take to the water near Taiji Cove in Taiji, Wakayama Prefecture. There, they pursue dolphins and other cetaceans using a technique called “drive hunting.”

If you haven’t watched this type of hunting in action in “The Cove,” you really need to do so. It’s not pleasant, but it’s eye opening.

Drive hunting is simple, effective and brutal. The fishermen go out into the cove in 12 boats as dawn approaches. When they spot a pod of dolphins, the boats line up behind one another and lower flared stainless steel poles in to the water on each side of every boat.

The fishermen begin striking the poles with hammers to produce what’s been described as a “wall of sound underwater.” The dolphins end up disoriented and trapped between land and the underwater noise. Frightened and unable to navigate properly, they allow themselves to be driven by the fishermen deeper and deeper into the cove.

The fishermen seal all exits from the cove with nets and keep the dolphins swimming in confusion and fear — sometimes for hours, in an attempt to exhaust them. They’re typically held this way until the next day.

The fishermen then force the dolphins toward the rocky beach, where they kill many, capture others for sale to aquariums and live entertainment venues and release a lucky few.

It’s unknown how many of the released cetaceans later die as a result of the cruelty they experience in these killing coves at the hands of man.

The statistics for the number of small cetaceans captured or killed in Japan waters is sobering. The 2013-2014 total for all small whale and dolphin species allowed to be taken by harpoon, drive hunts and coastal whaling in Japan was 16,497 individuals, according to Whale and Dolphin Conservation.

While this lawsuit won’t stop all forms of dolphin hunting, it aims to stop unnecessary harm. Perhaps if a Japanese court views all these hunting methods as too cruel, this litigation will have a far reaching effect on the Japanese whaling industry.