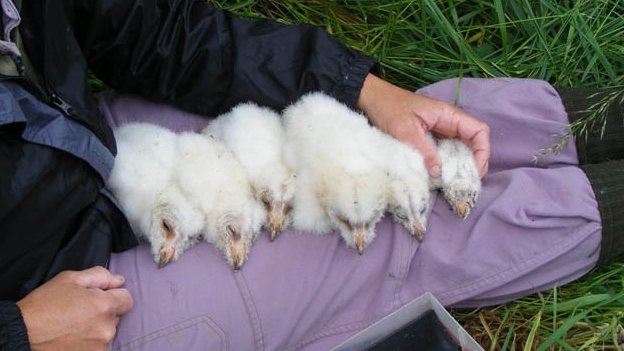 Conservationists are celebrating after barn owls nesting at a Cambridgeshire farm hatched twice as many chicks as this time last spring. Three pairs of birds at Lark Rise farm have produced 17 chicks in total and may have a second brood this summer. The UK barn owl population was hit badly last year after a late spring.

Vince Lea, from The Countryside Restoration Trust which runs the farm, said the brood was “the biggest ever” in the 12 years since the owls arrived.

“We had no owls in this area for a long time, then eventually they started to nest and generally we’d have about three chicks per pair each year,” he said.

“These record-breaking numbers of barn owl chicks are a direct result of the trust’s wildlife-friendly farming methods.”

The increase was “astonishing evidence of a comeback”, he added.

Meadows, grass margins and hedgerows had “helped create an ideal barn owl habitat”, Mr Lea said, as well as encouraging other wildlife including water voles – “their favourite snack” to the area.

Dead voles had been found stored in one of the three nesting boxes on the 450-acre (182 hectares) arable farm near Cambridge, which Mr Lea said was proof of an abundance of that species on the farm.

Colin Shawyer, from the Barn Owl Conservation Network, which monitors the species, said 2013 had been “an exceptionally poor breeding year”.

“Lark Rise’s brood is most definitely a sign that 2014 is going to be a good one for barn owls.

“Two of the females have not gone into moult yet, which is a good sign they will attempt a second brood,” he said.

The British Trust for Ornithology estimates there are about 4,000 breeding pairs of barn owls in the UK, and lists their conservation status as “amber” indicating the species is, or has recently been, in decline.

This article was first published by BBC News Cambridgeshire.

So good to read about this fantastic news for the Barn owls.