Hundreds of bird-watchers have flocked to the Norfolk coast in the hope of catching a rare glimpse of a migratory great knot in Britain. The elusive wading bird, more at home on the Australian coast, has only been seen in the UK on three occasions since 1989, experts said.

Brian Egan, from the Norwich-based Rare Bird Alert, said the “enigmatic bird” was “exciting for many people to see”. It was first spotted on Breydon Water, near Great Yarmouth, on Sunday evening. “Great knot breed in a tundra habitat in Siberia and migrate as far as the Australian coast,” said Mr Egan. 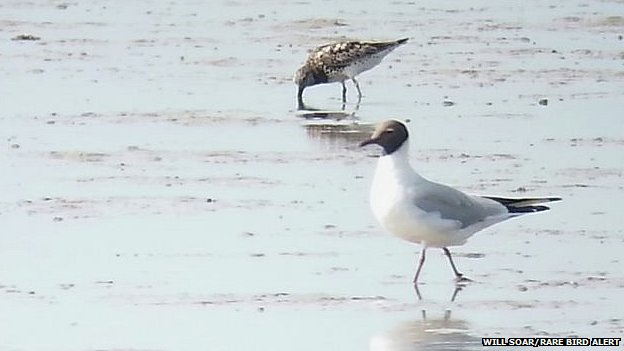 “Where this bird has come from is difficult to say for sure, but it’s likely to have been on the Asian coast and has got its route drastically wrong.

“It was around for 24 days, but was mostly seen from a very long distance so it became known as the ‘Great Dot’. Now whenever people speak of great knots in Britain, Great Dot gets a mention and at times the bird on Breydon Water has lived up to this.”

People have travelled from across Britain and Europe to see the bird in Norfolk.

“To see a new bird you’ve never seen in Britain before is an exciting thing for many people; the great knot is an enigmatic species for British birdwatcher to go and see.

“A guy from southern France travelled to see the bird on the day the story broke, which gives you some idea how big and important this sighting is.”

This article was first published by BBC News Norfolk.