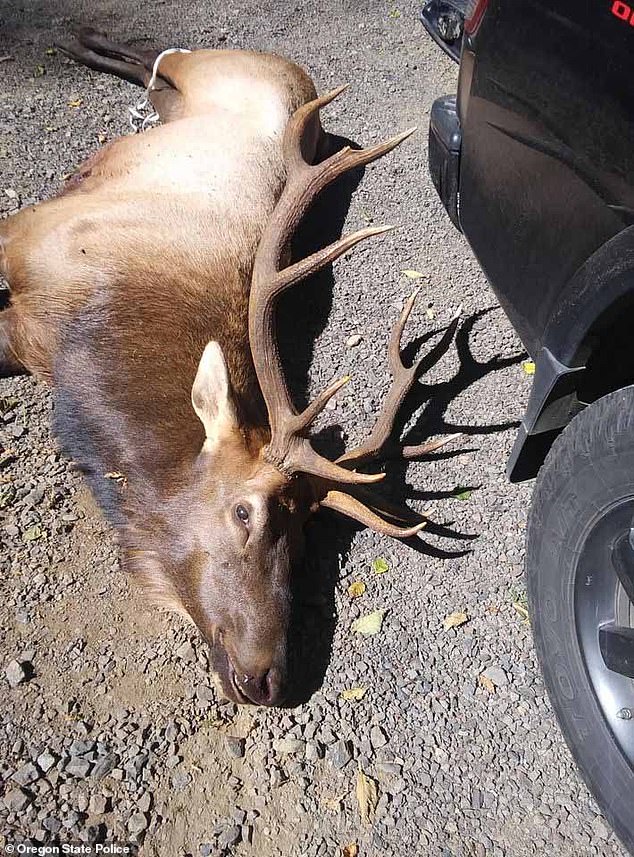 An archery hunter has been gored to death by an enraged elk in Oregon.

Mark David, 66, shot at and wounded the elk with a bow and arrow the night before in Trask Road area, Tillamook County.

David, from Hillsboro, had been hunting on private property when he fired at the bull elk but failed to kill the animal on Saturday night.

The hunter couldn’t find the injured animal before nightfall and decided to look for it the next day, according to Oregon State Police.

He set out with the property owner to find the elk and at around 9.15am on Sunday morning they found the animal alive.

David attempted to kill the elk with his bow but the enraged animal charged at the hunter and gored him in the neck with his antlers.

The property owner attempted to intervene but David suffered fatal injuries and died at the scene.

The elk was killed and the meat was donated to the Tillamook County Jail following the investigation, police said in a statement.

According to the Oregon Department of Fish and Wildlife, archery elk hunting season runs from late August until late September.

The state has 34 million acres of public land open to hunters.

In Wyoming, Yellowstone National Park has warned visitors to be wary of randy elks during mating season, which runs from early September to mid-October.

During this time, male elks are prone to having horn-clashing battles with each other as they attempt to impress their potential partners.

In a tweet, the park warned that bull elks can be ‘extremely dangerous’.

WARNING: The elk rut has begun in Yellowstone National Park. Bull elk can be extremely dangerous during this time. You are responsible for your own safety.https://t.co/YTbWAr7Shw pic.twitter.com/aCUNE5hpKn

‘WARNING: The elk rut has begun in Yellowstone National Park. Bull elk can be extremely dangerous during this time. You are responsible for your own safety,’ they said.

This article was first published by The Daily Mail on 31 August 2020. Lead Image: Mark David, 66, was gored to death by an elk (pictured) in Trask Road area, Tillamook County on Sunday morning. The elk was killed following the incident – Photo: Oregon State Police.

Excellent outcome. The only good hunter is a dead one!

KARMA is a bitch!

Roosevelt Elk are suffering a significant health problem – TAHD. Response associated hoof disease is crippling a high proportion in some areas. Cervix consensus nelsoni, further east,inland, smaller Southside antlers, also suffers, from western Idaho to the massively human-sense areas where the more forest-adapter C. c. Roosevelt occur. The disease, spread b hooves in setter microenvironments, is a bacterium, a spirochete. Humans should NOT be hunting them, as we choose the healthy to die for our pleasure and perceived social status. Oregon’s fish &wildlife commission is, unfortunately filled with headhunters including some bowhunters. The state commission is also manipulating rules… Read more »

Treponeme associated. This tablet autocorrects, but has a vocabulary of a techie, a trump, a toddler.

One for the elk a life for a life it’s only fair!

Don’t expect any sympathy or tears from me for the DEAD, heartless, gutless, sadistic, barbaric POS, he got exactly what he deserved, just a shame that the elk didn’t manage to kill the slim-ball’s ‘partner’ as well….now that would have been Karma payback. The only GOOD hunter is a DEAD hunter so justice has been served.

Poor elk, but hunter got what he deserved!

Nothing quite as satisfying as a good hunting “accident”

If you want to hunt build a time machine and go back to the Stone Age, sadistic losers

One down but unfortunately many more to go!

He just couldn’t learn a lesson. Domination and revenge…. good traits for nature???????

34 million acres to kill innocent Wildlife in their own territory!!??.

Bow and Arrows need to be OUTLAWED!!. The Cruelest Weapon that only Sadists choose to kill with!!. To make the Suffering of an animal lengthy!!

How I wish a silent drone would be invented that Hunts the S.O.B’s that do those terrible things to animals!!

100% agree, Janet. Bow hunting and trapping need to be OUTLAWED. We need non-consumptive funding for wildlife.

Thank You Karma!!. Take on the rest of the Cruel Hunters to!!!

Thou shalt not kill.

What can one say. If you seek to kill, be expected to be killed. Sad.

Good. Now the deer had to suffer.