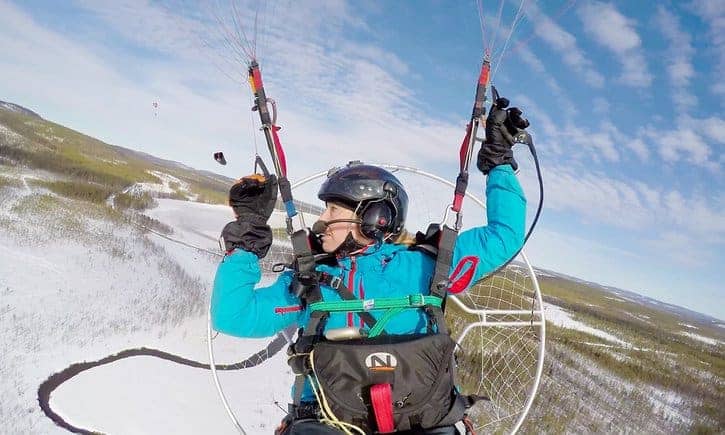 A British conservationist took to the skies in a motorised paraglider on Monday morning for the start of a daring 4,500-mile expedition across the Russian Arctic that will attempt to shed light on the decline of the UK’s smallest, shyest species of swan.

For the next 10 weeks, Sacha Dench, 41, will act as a “human swan” and follow the route of thousands of Bewick’s swans on their annual migration. From the tundra of Siberia she will head west and south through 11 countries including Finland, Poland and Germany to the swans’ wintering grounds in Britain and other parts of western Europe.

A light tailwind gave Dench the ideal conditions to start her journey from the Pechora delta on Russia’s northern coast.

“I’m so excited to finally be off. I’ve been planning this expedition for two years. It’s going to be a real adventure. I love flying and I’m fascinated by wildlife. I’m filming the whole trip and I can’t wait to share my swan’s eye view with the world,” she said.

By meeting people who cross paths with the swans each autumn, she will attempt to find an explanation as to why so many fewer swans have survived the journey in the past 20 years. In 1995, there were around 29,000 Bewick’s in Europe; by 2010, the figure had dropped to 18,100 and the numbers have continued to decline.

There are multiple factors involved, say experts, but the main one is illegal shooting. “About a quarter of Bewick’s have shot in them, when we x-ray them at Slimbridge [a wetland centre in western England],” Dench has said. “But even at that high rate is doesn’t seem to be solely responsible for their decline.”

A loss of wetlands for the swans to land on, disturbance of habitats along the route and more predation by Arctic foxes, a proliferation of power lines that swans may strike in mid-flight, and climate change are all considered further factors.

In 2012, as the numbers of Bewick’s swans reached an alarmingly low level, an international action plan was agreed by countries that lie beneath the birds’ migration path. Dench’s expedition – known as the Flight of the Swans – is the culmination of that effort.

“My biggest hope is that we better understand what is going wrong for the Bewick’s swans. They each first make this long journey at just a few months old, and they return here to their birthplace every summer for the rest of their lives. It’s an extraordinary lifestyle, but sadly fewer and fewer are surviving,” she said.

“We’re doing all we can as conservationists to get to the bottom of this problem, but it’s not happening fast enough for the swans, so it’s time to get on the road and in the air, to see the places and meet the people that might hold the key to this mystery.”

Her mission, which has been backed by Dame Judi Dench (a distant relative), Sir Ranulph Fiennes and Sir David Attenborough, will see her spending many hours every day in her tiny craft, travelling at around 35mph and being exposed to temperatures of -9C (15.8F).

Dench will either camp in the open or seek shelter with local people, including Nenets, nomadic reindeer hunters. Her progress is being tracked by satellite and twice a week she will broadcast video diaries, detailing her progress and encounters with the swans and the people along the way.

In late October, after travelling through Europe, she will land in France and wait for the right conditions to attempt to cross the channel. When she reaches London she will fly up to the Thames as far as the O2 Arena then either swim or travel upriver by boat to the WWT London Wetland Centre in Barnes, south-west London.

The arrival in the UK of Bewick’s swans – the smallest and rarest members of the swan family – traditionally heralds the start of winter.

The species particularly interested Sir Peter Scott when he set up the WWT at Slimbridge in Gloucestershire after the second world war. He realised it was possible to identify individual animals from their bill markings.

Bewick’s have migrated to Slimbridge every winter since 1963 with adults teaching their young the route. Each swan is recorded by the unique pattern of black and yellow on its beak upon arrival, as part of one of the longest-running studies on a single species.

This article was first published by The Guardian on 19 Sep 2016.

How absolutely amazing the extreme work of what this one person is doing, hope she doesn’t suffer illegal lead shot too. Humans so resourceful & advanced since the days of killing animals w/ clubs & spears, can now use weapons to even shoot high-flying birds out of the sky.