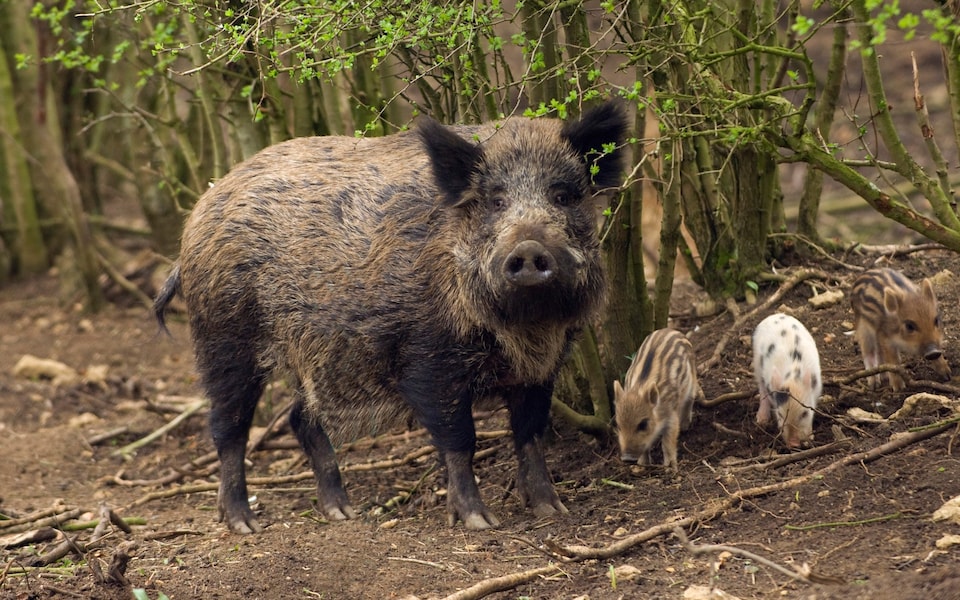 A British expat has turned her dream retirement home in Spain into a makeshift wildlife sanctuary after taking pity on boar which have been injured or orphaned by hunters. Victoria Korpics, 52, says far from their ferocious, snarling image, they animals are friendly, intelligent creatures who have dragged themselves back to her home still bloodied from being shot.

Victoria and husband Chris moved near Alicante for health reasons, but have since taken the wild hogs into their hearts. They now have around 15 coming and going from the property.

But Victoria, a retired chef, believes the hogs themselves are worth saving, despite being considered pests in much of Spain. She and Chris, who has chronic obstructive pulmonary disease and is registered disabled, moved to their olive farm five years ago so he could benefit from the fresh air and warm climate.

Trading in their life on the border of Cumbria and the Yorkshire Dales, they bought an eight-acre piece of land in the countryside and originally had no interest in animal protection until the hunting season was brought to their doorstep.

Originally taking in one injured hog, who Victoria named Snorky, the number soon began to grow, with the couple now looking after the first resident’s grandchildren.

Feeding orphaned piglets is a major part of Victoria’s day, and she spends weekends and holidays looking for casualties and watching over her boar, which consists of two groups. Porky, three, is the oldest. Victoria said: ‘The hunting season is horrendous.

The hunters are trigger happy to say the least and they will come close to people’s homes. ‘They have shot pregnant boars and sucklings. We have lost three boars so far this year and I have to go out making sure the hunters are not about to shoot any of the boar on our land.

‘I’m not against hunting, I realise boar can be a problem in some areas and at times they needs to be culled, but it needs to be done by a trained marksman, not someone with a shotgun on a weekend or holiday blasting anything that moves.

‘Some locals are really good, they like to see the boar in the wild and education is key to making a difference with the younger generation. ‘Boar can be dangerous when cornered with their young, as anyone would be, but they are very intelligent animals and it makes such a difference when people get to see them in the wild.’

Boar are nocturnal and usually come to the unfenced, self-funded shelter in the morning to feed before rooting around the bamboo plants, trees and olive groves, digging holes for grubs and lounging by the pool.

One resident, Osiris, made a bloodied appearance a month ago. Victoria said: ‘Osiris came back with one of the biggest bullet holes you have ever seen. ‘It took her a week to drag herself home. We gave her antibiotics and she’s doing okay, but she won’t leave the garden and the grounds. ‘The boars still live in the wild and come here because they were babies who were here with their mothers.

‘We’ve put up red signs saying no hunting, reminding the hunters they can’t come onto our land and they do respect it, but if I won the lottery I would fence off the garden and grounds.’ Highly adaptable to new environments, boar have no natural predators in Spain and are generally considered a pest blamed for invading towns and cities, causing road traffic accidents, damaging farms and carrying diseases including tuberculosis and hepatitis E which can jump to humans.

They are hunted throughout the year, though animal rights groups have disputed estimates showing the populations are growing. In December 2019, Spanish expat newspaper The OIive Press reported warnings that ‘aggressive’ wild boar were on the loose around an upmarket development on the Costa Del Sol. Victoria, however, has lived side-by-side with the creatures for four-and-a-half years and says she doesn’t have a scratch to show for her troubles. She is more concerned that her boar will become trophy targets for hunters, which is why she keeps the exact location of the refuge a secret.

She said: ‘I live every day with them. A lot of people listen to boars and think they’re being aggressive with one another, but they’re arguing with one another like stroppy teenagers. ‘I’ve seen no sign of disease, it’s more prevalent in intensive farming than in wild animals.

‘They are also good for cleaning the land. Scorpions, tarantulas, spiders, snakes, they eat all your insects. I try not to intervene because they are wild animals but when their mothers have been shot, what can you do? ‘The tiny babies are left behind and they can’t feed from another boar. One of the babies turned up still covered in blood from nuzzling its mother who had been shot.’

We want to give something back Victoria views the shooting of the bears, which is being investigated, as a wider erosion of wildlife in Spain that she wants to preserve for future generations. ‘The younger generation in Spain have now turned against hunting, and it’s mainly the older generations who support it,’ she said.

‘With the two bears being shot and the seas being full of plastic, we need to act now or there will be nothing left. ‘Apart from a few hunters Spain’s been good to us, this is our dream home and we love it here. Now we want to give something back.’ Victoria has started a Facebook page dedicated to her boars under the name @snorkypork.

This article was first published by Metro on 7 December 2020. Lead Image: There are more than 1000 boar in the forest CREDIT: CHRISTOPHER JONES.

There are native predators in Spain, also heavily poached by trigger-happy gunners. The Iberian Wolf still lives in the northwest quadrant, sometimes shot in Portugal as well.
Brown bears, really largely plant eaters, in the Pyrenees only, are also gunned down on sight.
I suppose Lynx ambush some piglets. None of these are allowed to exist in costa brava or del sol.
Matter of fact a hiker was killed by one of those sterling, eagle-eyed hunters (these fat dimwits do this more often in North America) this autumn.

It is TIME that gun killing for pleasure was completely banned worldwide.

George. FYI, you are right about natural predators, with a few (and very slowly increasing) records of wolf from the Pyrenees and pre-Pyrenees now as well as NW Spain and N Portugal, but I differ on what you say about bears (which indeed are mainly vegetarian and carrion feeders). There are far more (but still endangered) brown bears in the Cantabrian mountains (from extreme E Galicia eastwards through the mountains to far N Burgos), totalling around 330 bears, as opposed to around 45 in the Pyrenees. Although far too many have been shot in the Pyrenees over the years (nearly… Read more »

Couldn’t agree more about hunting worldwide being banned – it is a disgusting, heinous occupation that is denying future generations of humans, the delightful sight of wild animals, the world over. A planet without wild areas and animals, is a bereft, silent place.

I wish there were millions more of people that do what she is doing, for All Animals. Bless Her Beautiful Heart. <3 <3