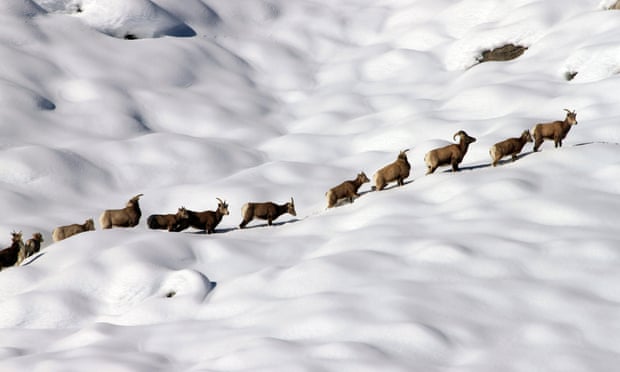 In order to save one endangered species, California scientists are having to relocate another iconic creature that is, regrettably, eating it.

The California department of fish and wildlife is in the process of moving mountain lions over 100 miles away from struggling populations of bighorn sheep, which are unique to the Sierra Nevada mountains.

The herbivores were first listed as endangered in 1999, when their population was estimated at only 125 individuals, according to researchers.

“There’s no expectation that any of the lions we move are going to stay where we put it, regardless of age or sex,” acknowledged Danny Gammons, an environmental scientist for the sheep recovery program. “The goal is to get it away from bighorn sheep.”

While sheep numbers have risen to almost 600 animals, recovery has been slow and stymied by mountain lions, which eat the sheep primarily in the winter months when the bighorn migrate down from the high country.

The sheep are dispersed between 14 small herds, and just a single mountain lion can stop a herd from growing or even wipe it out completely.

The agency’s initial response to the sheep-eating lions was lethal removal. But the state’s fish and game code has been revised to require that non-lethal methods be attempted first.

In spring 2020, a young female mountain lion who had been feeding on sheep and was living close to a small, sensitive herd became the first to be relocated as part of the sheep recovery program.

After relocation over 100 miles away, her movements were erratic, Gammons said. But today, the lion is still alive and appears to have settled down in a new territory far from the sheep.

This year a five-year-old male mountain lion was also moved over 100 miles. According to Gammons, he had been eating sheep since they first collared him in 2018, and has killed at least nine individual sheep.

Following his relocation, however, the lion turned around and walked the entire distance back to where he was moved from, Gammons said. A month later, he was moved again, this time over 200 miles in the opposite direction.

“Within the first 24 hours, he had 360 degrees to choose from in which to travel and he started making a beeline right back to where he came from,” Gammons said. The lion has since veered off course, but it’s too early to tell what he will do.

Mountain lion biologists say the animals’ keen sense of direction and ability to travel hundreds of miles in search of a territory or mates can complicate relocation efforts.

John Wehausen, a retired research scientist with the University of California, said the root of the problem might be the disappearance of other big predators from the landscape. It is theorized that wolves and grizzly bears, which were exterminated in the state, may have regulated lion populations.

“This is a fundamental conundrum that has haunted many of us,” Wehausen said. “If we are interested in keeping the Sierra bighorn around, and they’ve been here for a very long time … we are probably going to have to manage lions.”

This article was first published by The Guardian on 30 March 2021. Lead Image: Bighorn sheep are seen on their winter range on Mount Langley near Lone Pine in the Sierra Nevada. Photograph: AP.