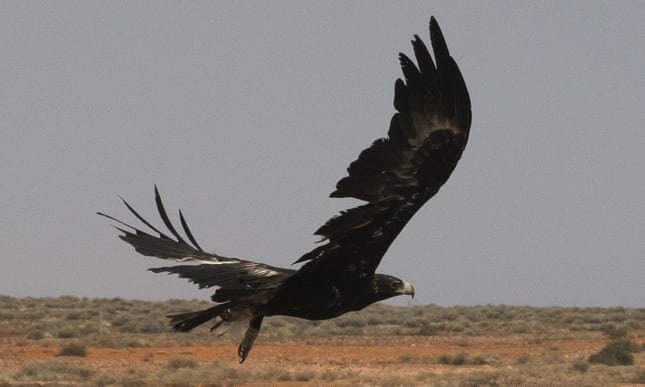 Conservation groups have called for a Victorian landowner to face charges under the Wildlife Act, after he admitted to his part in killing 420 wedge-tailed eagles over an 18-month period in the Bairnsdale magistrates court last week.

John Auer pleaded guilty to charges brought by the state Department of Jobs, Precincts and Regions of misusing agricultural chemicals. He was fined $25,000 and received a 12-month good behaviour bond. He was also given a 12-month community corrections order.

Auer and former farmhand Murray Silvester, a New Zealand national, used the insecticide Lannate and other chemicals to poison the eagles at Tubbut in the Snowy Mountains between October 2016 and April 2018.

Silvester was sentenced to two weeks jail, fined $2,500 and deported last year. The penalty was criticised for its leniency at the time, despite the fact that it was the first custodial sentence ever handed down for destroying protected wildlife in Victoria.

Emails and text messages presented in evidence showed that Silvester was acting under the instruction of Auer. The Age reported that magistrate Simon Barnett described his offending as “calculated, unacceptable and disgraceful behaviour”.

Dr Jenny Lau, from BirdLife Australia’s preventing extinctions program, called for the Department of Environment, Land, Water and Planning to charge Auer under the Wildlife Act before the statute of limitations came into effect.

“BirdLife Australia is concerned that one of the perpetrators of these deliberate, barbaric killings has only been prosecuted for the misuse of chemicals and no charges have yet been laid under Victorian Wildlife Act for the deaths of the eagles,” Lau said.

“The scale of the killings is so great, and the long-term impact on the population of wedge-tailed eagles across East Gippsland and beyond is unknown.

“With time running out before prosecutions can be made under the Victorian Wildlife Act, BirdLife Australia demands that further legal action be taken for these serious wildlife crimes.”

Tim Beshara, federal policy director of the Wilderness Society, said charging Auer for the misuse of agricultural chemicals for the purpose of killing wildlife was akin to “prosecuting a bank robber for failing to stop at a traffic light”.

“The Victorian government needs to explain why their environment department hasn’t brought charges under their wildlife laws. The credibility of Victoria’s wildlife-protection regime is at stake.”

“This is just another example of the state governments failing to protect our natural wonders and why we need the federal government to step in and do the job properly.”

Last month, the RSPCA called for national animal welfare laws after a spate of cruelty cases, including another poisoning incident near Violet Town, Victoria which led to the deaths of more than 200 birds, among them 25 more wedge-tailed eagles.

The largest bird of prey in Australia, wedge-tailed eagles have faced persecution in Australia since white colonisation for occasionally killing lambs, although rabbits and hares are principal prey items.

However, in arid Australia, groups of wedge-tailed eagles have been observed taking down prey as large as red kangaroos. Carrion, including livestock, is another major food source.

Until the 1970s, bounties were paid for the carcasses of hundreds of thousands of wedge-tailed eagles, before the species was officially protected in all states. It is listed as endangered in Tasmania.

A spokesperson from the DELWP said that it was “still investigating options in relation to future charges”.

It said wedge-tailed eagles were a protected species and “anyone found killing, harassing or disturbing them could be fined more than $8000 and an additional fee of more than $800 per head of wildlife”.

The maximum fine faced by Auer under the Wildlife Act if he was charged and convicted for killing 420 eagles would be $354,397, and/or six months jail.

This article was first published by The Guardian on 21 November 2019.