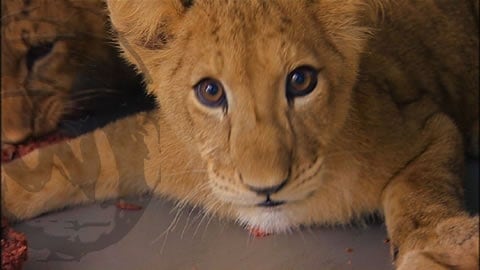 “We Bought a Zoo (2011)” this film portraits a story that is not far from reality and I was fortunate to be involved in filming behind the scenes the revival of one in tropical Australia.

The receivers of this closed zoo appointed a zoo animal carer to look after the animals welfare until such time a new owner was found to purchase the zoo.

These are some of the behind the scenes with “Tim Husband” the appointed Zoo Keeper and a whisperer to these animals. We will in a near future release some more fascinating footage as a tribute to Tim’s remarkable professionalism and integrity toward these magnificent animals in a love and survival stories.

The following video segment is a dramatic lion cub scene where gulping the meat without properly chewing has almost disastrous consequences. Although a situation like these in captivity is quite rare, deaths have occurred from food chocking on exotic captive animals in New Zealand and the Rotterdam Zoo.

Performing the “Heimlich maneuver” in a lion cub, is a common procedure, by applying several forceful abdominal thrusts that force air out of the lungs via the diaphragm. It may seem hard and brutal, but in comparison to a kick from a Zebra, this is a walk in the park for any lion.