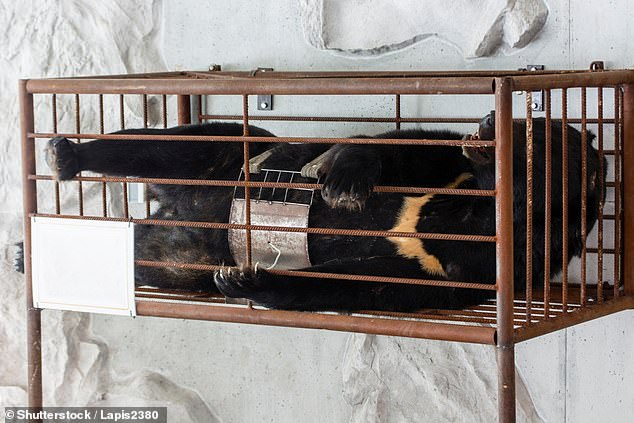 China has approved the use of bear bile to treat coronavirus patients, angering activists and raising fears it could undermine efforts to stop the illegal animal trade which is blamed for the emergence of the disease sweeping the globe.

The move comes just weeks after China banned the sale of wild animals for food, citing the risk of diseases spreading from animals to humans.But the National Health Commission in March issued guidelines recommending the use of ‘Tan Re Qing’ – an injection that contains bear bile powder, goat horn and three other medicinal herbs to treat critically ill coronavirus patients.

It is one of six traditional Chinese medicine products included in the directive.President Xi Jinping has been keen to promote traditional medicine and saying it should be given as much weight as other treatments.

The active ingredient in bear bile, ursodeoxycholic acid, is used to dissolve gallstones and treat liver disease but has no proven effectiveness in treating COVID-19. The medicine can treat patients with respiratory diseases, including pneumonia, acute bronchitis and chronic bronchitis, according to its producer.

China has used both traditional and Western medicine in its battle against the novel coronavirus, which has killed more than 3,000 and infected more than 82,000.

But activists say green lighting a treatment that uses an animal product is ‘both tragic and ironic’ given that the origin of the deadly coronavirus is linked to the trade and consumption of wild animals.

Brian Daly, a spokesman for the Animals Asia Foundation, said:’We shouldn’t be relying on wildlife products like bear bile as the solution to combat a deadly virus that appears to have originated from wildlife.’

The coronavirus is believed to have come from bats, but researchers think it might have spread to humans via an intermediate host mammal species.

Chinese disease control officials have previously identified wild animals sold in a market in Wuhan market as the source of the coronavirus pandemic.

Conservationists have long accused China of tolerating a cruel trade in wild animals as exotic menu items or for use in traditional medicines whose efficacy is not confirmed by science.

Daly added: ‘Promotion of bear bile has the propensity to increase the amount used, affecting not only captive bears, but also those in the wild, potentially compromising an already endangered species in Asia and across the world.’

There are about 20,000 bears being held in tiny cages under cruel conditions across China to cater to the demand from traditional medicine suppliers, said Kirsty Warren, a spokeswoman for World Animal Protection.

Bile farming is legal in China – but exports of the product or treatments made from it are banned under the Convention on International Trade in Endangered Species, which China is a signatory to.

Richard Thomas from animal rights NGO Traffic said: ‘Across Asia, bear bile trade is widespread, although it is illegal in most countries.’

He added that the active ingredient ursodeoxycholic acid is readily synthesised in laboratories, so even if it did prove to be popular there should be no need for bear bile to be included in medicines.

How is bear bile extracted?

The Asiatic Black Bear is commonly and illegally traded for their body parts throughout Asia, including Myanmar, China, Vietnam, Japan, Malaysia and Indonesia, according to Jill Robinson MBE, founder of the Animals Asia charity.

It is farmed in China and Vietnam for its bile, which is thought to have high medical values. The bear’s paws, teeth and gall bladders are desirable ingredients for traditional medicine practitioners.

According to Animals Asia, hunters obtained bear bile in the past by killing bears in the wild and removing their gall bladder.

In the 1980’s, bear bile farming emerged and workers started to constantly extract bile for the duration of a bear’s life. Experts believe that more than 12,000 bears are kept on bear bile farms in China and Vietnam today.

The Asiatic Black Bear is listed as Appendix I by the Convention on International Trade in Endangered Species of Wild Fauna and Flora, an international agreement between governments aimed to protect endangered animals and plants.

Appendix I is the highest category for endangered species, and according to the convention, animals in the category are threatened with extinction. China in February declared an immediate and ‘comprehensive’ ban on the trade and consumption of wild animals that was welcomed by environmentalists.

Beijing implemented similar measures following the SARS outbreak in the early 2000’s, but the trade and consumption of wild animals, including bats and snakes, made a comeback.

But in signs that the measures are being taken more seriously this time, the southern city of Shenzhen also passed a law banning the consumption of wild animals – including cat and dog meat.

The move was welcomed by animal rights activists, with Humane Society International saying the trade kills an estimated 10 million dogs and four million cats in China every year.

This article was first published by The Daily Mail on 2 April 2020.

We should all boycott China. Buying their goods only condones these barbaric practises. Tradition? So was slavery.

Beyond sick, I continue to boycott any products made in China.

Bunch of assholes over there. Cruelty to the max. They are good at that.

They will never stop what they are doing . Torturing animals is normal way of life .I should say they aren’t alone Karma needs to intervene because everything else is falling on death ears to stop these horrendous torturing

They’re the reason why the whole world is in lockdown.
The wildlife trade and wet markets should have been banned and closed down a long time ago.
Some one has to put a stop to this permanently.
The Chinese need to be held responsible for their own actions, and be made to realise they are the cause of a lot of unnecessary deaths, around the world.

I hate those that do this

China, people from all over this planet loathe your cruel ways of life. Watch out!!

how about we tie the evil chinese people & see what diseases they carry?

Rid these evil doers off this planet..

These fking people are beyond fking stupid

why can’t these m0nsters just die.

How horribly inhumane. You are a sick and evil culture.

Stop the inhumanity and the cruelty

They are parasites. They live off of other people and animals. There has to be a cure for all diseases and it’s growing on this earth. It’s not a vaccine.

why why are people so stupid

Their moral standards are absent

Bill Maher will tell you.

I detest these thick evil immoral robotic so called “HUMANS”. They are not normal or do they think normal . Reap all you sow yet again !

Of course they would

Oh no… This is pure evil…

Typical barbaric Chinese. Their belief in so-called “traditional” medicine didn’t help Wuhan or the rest of China over COVID19 – and won’t. When are they going to give up their animal torture in the name of “medicine”? It doesn’t work and never will.

I loathe these filth-bag Asian animal abusing scumbags.They definitely need to be exterminated off the planet.

Just when we thought they had changed their ‘Traditional Ways’

why can’t these demons use their own FKIN bile with so many of them?? and take your FKIN UGLY HANDS FROM INNOCENT animals..