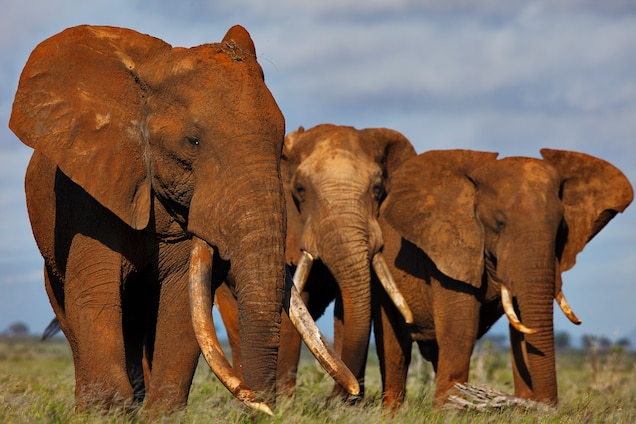 China will shut down its domestic ivory trade by the end of 2017, according to an announcement made today by the Chinese government.

The announcement comes more than a year after China’s President Xi Jinping and United States President Barack Obama pledged to enact “nearly complete bans” on the import and export of ivory, an agreement Wildlife Watch reporter Rachael Bale described as “the most significant step yet in efforts to shut down an industry that has fueled the illegal hunting of elephants.”

With African elephant populations plummeting because of poaching for the ivory trade, China’s announcement that it will phase out its legal market by the end of next year comes as welcome news to advocates. Photograph by Brent Stirton, Getty Images, National Geographic Creative

It also follows a commitment made in October by the international community to close domestic ivory markets. “This is the best New Year’s present I’ve ever had,” says Sue Lieberman, vice president of international policy for the Wildlife Conservation Society, a nonprofit based in New York City that works to help save elephants and other wildlife. “China is the world’s largest market, both of small ivory items and high-end, expensive ones.”

The global ivory trade has been banned since 1989, but during recent years large-scale poaching has resumed, and the African elephant population has dropped to as low as 415,000—a net decline of more than 110,000 from 2007. Advocates believe that legal domestic ivory markets perpetuate an illegal trade because older, pre-ban ivory can’t easily be distinguished from poached ivory.

The U.S., also a significant market for elephant ivory, held up its end of the agreement with China in June when it enacted a near-total ban on the commercial trade of African elephant ivory. The new rules further limited exports and sales across state lines and restricted a hunter’s allowable ivory trophy imports to no more than two a year.

China, meanwhile, has spent the past year exploring how to implement such a ban. The country convened a group of researchers from several disciplines to assess options and make recommendations to the government.

China now has 34 ivory manufacturers and 130 licensed retail shops that sell ivory, Wei Ji, an independent wildlife researcher, told the Guardian earlier this month. According to today’s announcement, China will revoke some licenses by March 2017 and eventually stop all commercial ivory carving and retail sales by the end of the year. The plan to phase out the ivory trade also encourages ivory carvers to begin using other materials.

In 2008 the country successfully lobbied the Convention on International Trade in Endangered Species of Wild Fauna and Flora (CITES), the body that sets global wildlife trade policy, to allow it to buy a limited amount of ivory to sell in a tightly controlled market within its borders. About that time it also built the world’s largest ivory-carving factory and began opening shops to sell ivory. To further legitimize the industry, the government even added ivory carving to its official register of Intangible Cultural Heritage.

National Geographic went inside some of China’s carving factories in 2012 and revealed how China’s actions were promoting the legal and illegal ivory trade. Instead of keeping prices for ivory low, the government raised them, making ivory more profitable to poachers.

Today’s landmark declaration follows a pledge made by the Hong Kong government last week to phase out its domestic ivory market by 2021. Hong Kong is the world’s biggest legal retail market for elephant ivory and a major transit hub for illegal ivory, much of which goes to mainland China.

Lieberman says she hopes China’s one-year time line for phasing out its ivory market will spur Hong Kong to shut down its market more quickly. She adds that Japan and the European Union next need to crack down on their legal ivory trades, which conservationists say are helping fuel poaching.

“The only way to save elephants is for everyone to close their markets,” she says.

This article was first published by National Geographic on 30 Dec 2016. Lead Image: With African elephant populations plummeting because of poaching for the ivory trade, China’s announcement that it will phase out its legal market by the end of next year comes as welcome news to advocates.
PHOTOGRAPH BY BRENT STIRTON, GETTY IMAGES, NAT GEO IMAGE COLLECTION.