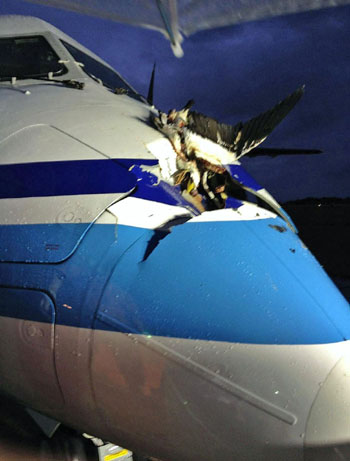 Bird strikes are a chronic problem for pilots, but an incident Wednesday over the East China Sea involving a Japan Coast Guard patrol plane was particularly serious.

After hitting an albatross at around 5:10 p.m. at an altitude of 300 meters, the Bombardier DHC8-315 sustained a big hole in its nose, and the dead bird was stuck in it, coast guard officials said.

The hole was reportedly as wide as 1 meter.

But the patrol plane flew on and landed at its intended destination of Ishigaki, Okinawa Prefecture, a little after 6 p.m. after leaving Naha at 2:50 p.m., the officials said.

None of the nine crew members on the plane was hurt.

The transport ministry dispatched investigators to Ishigaki on Thursday to look into the matter.

Bird strikes pose a serious threat to passenger planes and the transport ministry plans to set up radar equipment at Tokyo’s Haneda airport in April to track flocks of birds to help guide aircraft out of their way.

It will be the first such project in Japan. Bird strikes are on the rise at the nation’s busiest airport despite daily efforts by ground staff to disperse birds when they are spotted near flight paths.

This article was written and published by the Japan Times OnLine.