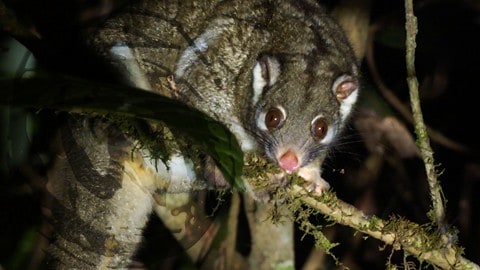 The Green Ringtail Possum (Pseudocheirus archeri) is one of the several rare and endemic species found only in northern Australia tropical rainforests. With an unusual green tinge, this is the result of black, yellow and white hairs in its fur. With this excellent camouflage this animal can be observed at all levels of rainforest by a trained eye or by pure accident as it crashed to the ground from an height of 15 metres and surviving to tell the story.

This solitaire animal, is also the only one lacking a conventional sleeping den, resting in exposed branches at all hours of the day and night and in all types of seasonal conditions. Over a period of 15 years, a significant decline of numbers has been noticed in tropical rainforest areas where once, common numbers where repeatedly accounted for … and they are not alone.

This is one I never managed to see up north – I did see striped possum, lemuroid ringtail, tree kangaroo and other great animals while lecturing and leading field trips at SFS, Yungaburra years ago – and also saw several macropods, owls and platypus with Alberto a little while later. Good to see you’re still around Alberto. Any chance you’ll be joining the wildlife tourism workshop at the Gold Coast in May? http://wildlifetourism.org.au/wildlife-tourism-workshop-2012/

Is this Ronda Green, a voice from the past no doubt. Well like they say ” you can take the men from the bush, But you can’t take the bush out of the men”. I have now diversified, from wildlife tourism, to filming wildlife. Now with two “wildlife” documentaries under my solo efforts and with much more to come, I fell that the passion is better spread this way. Love to catch up if you, if you somehow get back to NQ.

I certainly intend getting up there some day! Wish I could visit more often. Let us know if you’re coming south for a visit. Are you still doing research on platypus? The pair in our creek here had twins last year

No more platypus research, although I published my findings in a 40 minute documentary “Platypus In The Tropics” that just yesterday won a silver award at the “Telly Awards USA”, and is a “Premiere” at the DC Environmental Film Festival Washington in the “Embassy of Australia” on March,19.  This was a very difficult documentary to make, especially when there was no budget and you had to scrape for every cent, but I now I can finally say even when Jacques Cousteau (senior) failed the first ever attempt in actually filming the secrets of the platypus, I am know in the… Read more »

Congratulations on winning a Telly Award. We hope to see the documentary in the future in Europe. If only half your enthusiasm for this remarkable animal is transferd to film it’s u must see.

Yours sincerely,
Edwin and Petra, The Netherlands

well it won’t be long now, just on the final stages for a DVD. keep a look out for it on our website – http://www.wildcamaustralia.com
Still got the photos of you guys on your CD for memorabilia.
regards