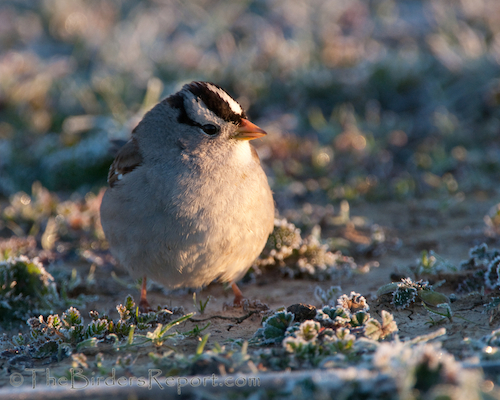 Do you enjoy our National Wildlife Refuges? Did you know that our national wildlife refuges are home to more than 700 types of birds, 220 varieties of mammals, 250 kinds of reptiles and amphibians, 1,000 species of fish and countless invertebrates and plants. They provide havens for some 280 endangered species, from the Florida panther to the polar bear1.

The nation’s National Wildlife Refuge System has grown to include 556 national wildlife refuges encompassing more than 150 million acres with at least one refuge in every U.S. state and territory.

It was a gorgeous day spent with some excellent experienced birders as well as some folks brand new to birding. We observed 62 species at the refuge this day, some of which I photographed (click on photos for full sized images).

This photo of a White-crowned Sparrow (Zonotrichia leucophrys) foraging on the frosty tundra was taken just after sunrise.

I am showing these birds in the order in which I took the photos. You will probably notice the difference in the lighting as the sun rose higher in the sky and the weather warmed up.

One of the first treats I received was a flock of at least 500 White-faced Ibis (Plegadis chihi) which flew directly overhead as they left the refuge for some of the surrounding agricultural fields. There were a few that remained and I was able to catch them preening in the early morning sun.

There were many Red-tailed Hawks (Buteo jamaicensis) seen on the refuge this day. This juvenile (note yellow iris and striped tail) was perched in a tree overlooking the marshes.

A bit further along the auto tour road I spotted a few male Ring-necked Pheasant (Phasianus colchicus), many others would be seen in the company of females along the elevated grassy areas.

There were also a large number of Western Meadowlarks (Sturnella neglecta) foraging in the grass along the road.

Of course, nearly the entire time, Greater White-fronted Geese (Anser albifrons) were calling out as they flew over.

There were the diminutive Ross’s Geese (Chen rossii)…

and several Ruddy Ducks (Oxyura jamaicensis) along the way…

as well as this beautiful Black Phoebe (Sayornis nigricans) that was busy hawking insects from several different perches along the pond edges.

Less than half way around the auto tour there is a viewing platform where this Red-shouldered Hawk (Buteo lineatus) seemed intent on viewing me!

Further along the auto route I saw not one, but two, Peregrine Falcons (Falco peregrinus) in the cottonwood trees on the eastern side of the refuge.

Back at the viewing platform there was a one-eyed Northern Shrike and this Ruby-crowned Kinglet (Regulus calendula) which must have been a female since we never saw a ruby crown.

and Snowy Egrets as well as Great Egrets (Ardea alba) were plentiful.

We also spotted more Bald Eagles (Halliacetus leucocephalus) than we had ever seen at this refuge.

So I ask you again, do you enjoy our National Wildlife Refuges? National Wildlife Refuges have been underfunded since President Theodore Roosevelt created the first refuge in 1903 and Congress refused to appropriate money to manage it. Without adequate funding, habitats are not restored, invasive species are left unchecked, poaching and other illegal activities occur and our nation’s wildlife suffers1.

America’s National Wildlife Refuge System is the world’s largest network of protected areas dedicated to wildlife conservation. For more than a century, the refuge system has been integral to bringing species such as the whooping crane back from the brink of extinction. Each year, tens of millions of people visit and enjoy national wildlife refuges in every U.S. state and territory, infusing nearly $1.74 billion into local economies and creating more than 32,500 U.S. jobs2.

Would you like to be part of creating an additional income stream for our National Wildlife Refuge System? If you haven’t heard of our proposal for a Wildlife Conservation Stamp, please check out our new website where we will be promoting a plan to get an alternative stamp issued to increase revenue for our refuges.

We are looking for bird enthusiasts, photographers, bloggers, biologists, hikers, conservationists, wildlife rehabilitators, scientists, teachers, artists and anyone else with a common passion and concern for our nation’s wildlife and wild habitats to join us in encouraging our legislators to create an alternative to the Duck Stamp for non-consumptive users of the wildlife refuges.

If this sounds like a great idea to you, providing a consistent source of income for our refuges, separate but parallel to the current Federal Duck Stamp program, please send me an email with a short bio and a photo (at least 150 x 150 pixels) to place on our “About Us” page. We will keep you updated on our progress in this endeavor and entertain suggestions on the best way to implement our proposal.

I hope to hear from you soon! In the meantime, here is a list of the species seen this day at Sacramento National Wildlife Refuge:

Great report Larry. I love going out to our NWR as often as I can. If you were out at Sac NWR this past Saturday then we might have crossed paths. Did you happen to make it down to Delevan or Colusa? Colusa is my favorite for photography with the late evening light. I will be posting shots from our trip soon.