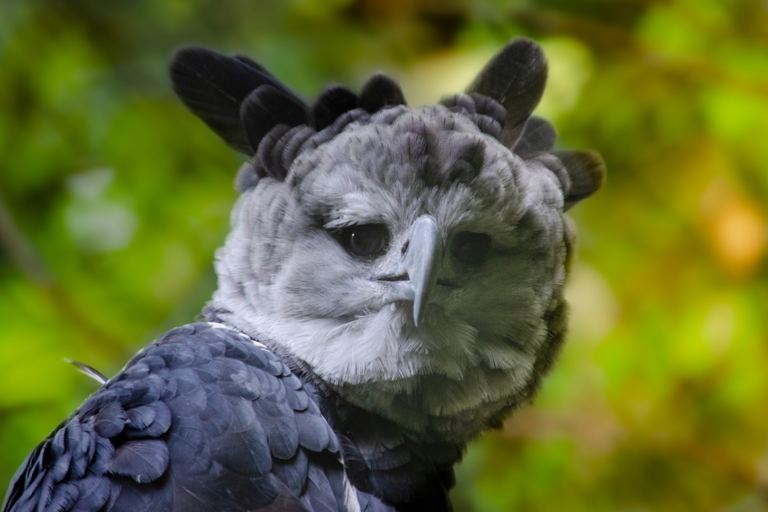 The rancher peers at an enormous bird high in the treetops. Reining in his horse, he squints upward. It’s not moving; maybe it will still be there when he gets back. An hour later, he returns with a gun. The huge animal is still there, motionless. Taking aim, he fires, and the heavy body comes crashing to the ground. He picks it up, marveling at its size and the incredible crest of feathers around its head. He strokes the soft gray and white plumes, perhaps feeling a sudden pang of sadness that the proud head is now lolling lifeless, as he puts the carcass over his saddle to show his family.

This scenario and others like it are impacting harpy eagle (Harpia harpyja) populations across Central and South America, according to a scientific paper recently published in the Journal of Raptor Research. Despite being the largest raptor in South America and the national bird of Panama, scientists know little about the extent to which the species is persecuted by humans.

In the study, the researchers found a total of 132 documented cases where a harpy eagle was killed or captured between 1950 and 2020, including 21 cases from Colombia and Panama that had never before been published in scientific journals.

“This story can be used to repair what has been done to this magnificent species over the last seven decades,” said Helena Aguiar-Silva, of the University of São Paulo and Projeto Harpia, Brazil, one of the scientists who compiled the persecution data set.

The harpy eagle’s range stretches from Guatemala and Belize in Central America, down into South America to Bolivia and Paraguay. Occasionally the birds are noted as far north as Mexico or as far south as Argentina.

Aguiar-Silva said there probably used to be stable harpy eagle populations in both those countries, but they have been driven locally extinct by the expansion of hunting and farming, as they were in El Salvador.

While the species’ range spans more than half a continent, that doesn’t mean it’s abundant. Surveys show that it is never locally common. The bird is slow to reach sexual maturity, raising just one chick per pair every two or three years, and the number of harpy eagles is decreasing.

Aguiar-Silva said the declines and local extinctions, combined with the evidence that it is frequently persecuted, should serve as a basis to reanalyze the global conservation status of the species. While the harpy eagle’s current conservation status on the IUCN Red List is “near threatened” at the international level, individual countries have placed it in more critical categories: it is classified as vulnerable in countries including Brazil, Peru and Venezuela, and critically endangered in Nicaragua.

A female harpy eagle’s wingspan can reach 224 centimeters (7.3 feet) and they can weigh up to 9 kilograms or 20 pounds in the wild, making them an impressive sight. Dietary analyses, including by Aguiar-Silva, have shown that harpy eagles mostly eat wild animals that live in trees. Sloths are by far their most important food source, but monkeys also make a popular meal.

Harpy eagles’ role in killing leaf-eating animals and omnivores like capuchin monkeys are important in maintaining the rainforest ecosystem. According to the research so far, harpy eagles only occasionally eat livestock, probably in part because they carry their food to trees to eat. Even females, which can be double the weight of a male, rarely prey on animals heavier than 5 kg (11 lb).

However, the rarity with which the eagles carry off farm animals has not stopped people from hunting them. Everton Miranda, a Brazilian scientist affiliated with the University of KwaZulu-Natal, South Africa, has studied why people hunt harpy eagles in Brazil. His research, investigating more than 180 harpy eagle killings over two years in the state of Mato Grosso, will soon be published in the journal Animal Conservation.

He told Mongabay that people usually shoot the eagles “out of curiosity.”

“People see this large raptor — they frequently don’t know what it is — and shoot it to have a closer look,” he said. “One trait that makes harpy eagles unfortunately prone to being killed … is that they remain perched on a single tree for several hours or even a whole day.”

This behavior gives the hunter the time to travel home for their gun and return to shoot the animal.

According to the interviews he conducted, most of the people who killed the eagles out of curiosity later expressed regret about it.

This surprising finding — that curiosity and a desire to see the birds close up could account for up to 80% of harpy killings in some places — echoes results from an earlier Brazilian study. According to Miranda’s research, prevention or retaliation for livestock predation represented only 20% of harpy eagle killings in his study site.

Of course, the reasons behind such killings are likely to vary over the harpy eagle’s range.

Santiago Zuluaga, senior author of the paper in Journal of Raptor Research, told Mongabay that in his experience some people hunt harpy eagles for food, while others capture them live for illegal sale. A recent killing in Colombia was to sell the bird’s feathers and claws on the black market.

“There is also a story of an eagle that was hunted to obtain one of the claws that is now used to baptise children, which is supposed to give them luck and strength for the rest of their lives,” said Zuluaga, with the Colaboratorio de Biodiversidad, Ecología y Conservación (ColBEC), Argentina, and the Fundación Proyecto Águila Crestada-Colombia, Colombia. “However, it is a story and we have not confirmed it.”

According to Mateo Giraldo-Amaya at EAFIT University, Colombia, who led the Journal of Raptor Research paper, the cases they found are “only the tip of an iceberg.”

“I believe that many more eagles are being killed today in Colombia and the Neotropics, but that this information usually does not come to light because of the nature of the events and the people who perpetrate them,” he added.

Notably, researchers found no records of raptor persecution in seven of the 18 countries inhabited by harpy eagles, including Bolivia, Paraguay and Peru. But this may not be the good news it appears to be. Researchers say the lack of hunting records is probably because there are no dedicated harpy eagle research or conservation programs in those countries, meaning there is nobody to document kills.

Zuluaga said that even in countries with harpy conservation programs, like Panama and Brazil, people still shoot the eagles.

In Panama, Karla Aparicio, another co-author on the paper, has been working to understand and conserve harpy eagles since 1994. In 2015, she set up the Fundación Naturaleza y Ciencia 507 to focus on researching and conserving birds of prey.

Following the lead of Aguiar-Silva at Projeto Harpia in Brazil, the 507 team, named after the international dialing code for Panama, set up the first camera traps to monitor harpy eagle nests in the country. As well as studying the species in the wild, they established a center for rescued birds of prey. Birds that can’t be reintroduced to the wild become ambassadors for their environmental education program, #HarpyS-cool.

Aparicio said she’s committed to teaching people about birds of prey. She knows better than most how, given the right opportunities, even harpy hunters can change their ways: her assistant of 20 years, Euriato Bainora, used to hunt harpy eagles but now works to conserve them.

Soon after Aparicio set up the 507 foundation in Panama, a chance event set Giraldo-Amaya on a path to replicate her work in Colombia.

As an undergraduate in 2016, Giraldo-Amaya had a run-in with a harpy eagle that stuck with him. At first, he was excited when his fellow students showed him a harpy eagle nest that they found with an Indigenous guide, Antonio Cunampia, while on a university field trip.

“A week later, we got the news that someone had killed the eagle and its left leg had been cut off,” he said. “It was very sad, and we were all extremely anxious about the fate of the chick without its mother.”

To check on the chick, the researchers needed a drone. And it turned out undergraduate Giraldo-Amaya had one.

“The greatest coincidence of life,” as Giraldo-Amaya put it. “Sadly, the chick died … but this experience marked me.”

His sense of loss over the death of the chick led him to seek out an internship with Aparicio in Panama, which in turn inspired him to co-found the initiative Proyecto Grandes Rapaces Colombia to do similar research and conservation work over the border in Colombia — the first project in the country to focus on harpy eagles.

Video of Zuluaga ascending to the nest found on Giraldo-Amaya’s field course.

In Brazil, scientist and conservationist Miranda has established a collaboration with wildlife tourist company SouthWild, based around making living harpy eagles a valuable resource for locals.

The ecotourism project offers $100 to local people for each harpy eagle nest discovered. The project also hires locals to build platforms so that tourists can see the birds at eye level, and to take care of visitors’ needs.

Miranda said his harpy protection model also conserves the surrounding forest, providing habitat for many other species. Thirty landowners have signed an agreement that includes protecting at least 320 hectares (790 acres) of forest surrounding a harpy nest.

“We pay the landowner $20 per tourist per day,” Miranda told Mongabay, noting that this has stopped eagle persecution in those areas.

Miranda said protecting the forest is vital, as deforestation remains the other major threat to harpy eagles. He said habitat loss caused by beef and soy farming are harder to address than direct persecution. Making meat production deforestation-free (soy is mostly used to feed farmed animals) requires action at every level, according to Miranda, from local law enforcement to international legislation.

But his years of working with the iconic harpy eagle make him determined to give the birds a fighting chance.

“There are a few occasions when you feel deep inside you’re doing the right thing,” he said. “When I first recorded a harpy laying an egg on a camera trap — then I felt heart-warmed by that small light that poets call hope.”

This article by Claire Wordley was first published on Mongabay.com on 16 March 2021. Lead Image: Harpy eagle. Image by Wildfaces via Pixabay.