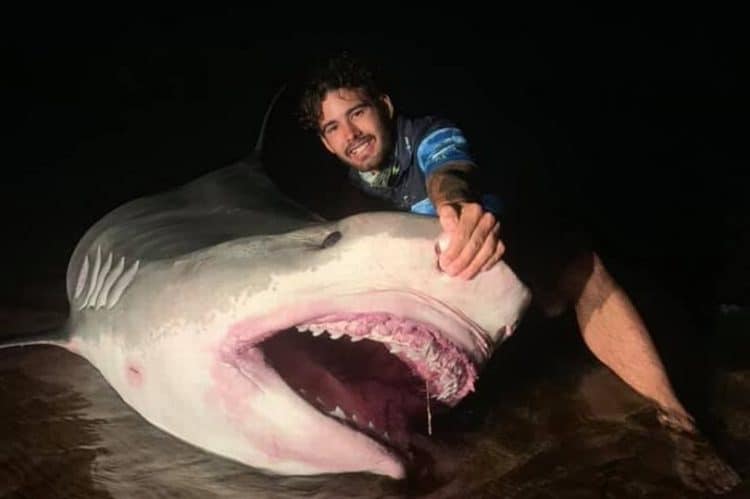 The men reeled in the shark on the coast at Pilbara, Australia, and posted photos on the Sharky-Pilbara Land Base Shark Fishing page, which has 100,000 followers.

One of the men wrote in a caption: “Just a 5m tiger used a tape measure to get a size of the shark, she was bigger then the tape, measuring 4m 80 from the tail to the gills so we guess 5m or evening 5.2 being our new PB life time catch.”

The page was inundated with comments from angry Facebook users, while others defended the fishermen who hauled it on shore.

One wrote: “Absolutely disgraceful! There should be no pride in this whatsoever, how dare you take a precious species from the ocean just for a ‘pb’ and for pleasure. What is wrong with you!”

Another wrote: “Having the fight from land…. hmmm, you should try that in the water: then the beautiful shark could measure you and put you on Facebook.”

And one claimed: “I think you’ll find this is not catch and release. “There is a rope attached to its tail which would mean it’s been dragged backwards at some stage.

“Unfortunately these animals rely on water passing through its gills whilst swimming forward or else they drown. The shark is very dead.”

A woman claiming to study marine biology said: “This is completely disgusting and should be Illegal.

“I’ve grown up fishing, I’ve caught sharks hell im studying marine biology. “Thing is if you want a thrill, to get up close with an amazing animal get in the water with it and get your pics and validation there.

“This looks like a pregnant tiger shark and it would’ve miscarried after this, You look really proud of yourself.” A man who defended the fishermen wrote: “Nice catch, why is it acceptable to pose with snapper, tuna, marlin and not a shark?

“It’s fishing and a great catch at that.” Mirror Online has contacted the fishermen for comment. It’s not the first time the men have been criticised for catching sharks.

One of the men wrote in a post last week: “You all probably have seen by now I’ve started posting a lot of release videos also. due to the annoying keyboard warriors that type before they read a post an accuse us of killing sharks for fun and have no idea what’s involved in this special sport of catch an release.

“50% goes to catching the fish 50% goes to releasing and taking full responsibility of the fish’s care making sure they swim out strong an healthy.” Listed as “near threatened”, tiger sharks can grow to 14ft in length and can weight 1,400lbs. The scavengers are second only to great whites in attacking humans.

A recent University of Miami study found that sharks can die if they do not recover from the stress of being reeled in or do not fight to extreme exhaustion while fighting the line.

Tiger and lemon sharks were shown to recover, while half of hammerheads swam away and died.

This article was first published by The Mirror on 16 September 2019.