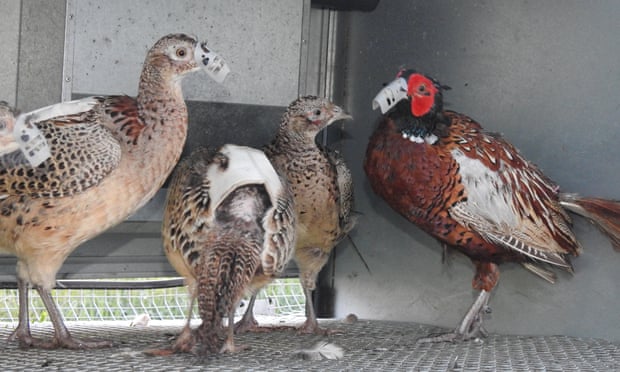 Pheasants whose chicks are destined to be shot in the UK are having their septums pierced in order to attach plastic masks to their beaks, according to an undercover film released by activists this week. The method of restraint is illegal in the UK.

The video, shot on a farm in Poland, also appears to show the birds being fitted with “breeding aids” and confined in small boxes to repetitively mate. The farm exports ready-to-hatch eggs to the UK for eventual shooting. Animal rights campaigners renewed calls for an end to the “factory farming” of game birds.

The shooting industry in the UK has experienced rapid growth in recent years. More than 20m pheasant hatching eggs were imported into England from the European Union last year, more than double the number in 2015.

Undercover footage obtained by the Hunt Saboteurs Association (HSA) appears to show how Bazanty pheasants bred at a farm in Klon, central Poland, have their septums pierced to attach plastic masks over their beaks so they cannot peck at each other.

Pheasant rearing in the UK is only governed by a code of conduct, as there are no specific laws regulating the breeding and rearing of birds for sporting purposes. The 2009 code of practice states that plastic spectacles fitted to beaks can “cause significant damage” and are illegal under wider animal welfare laws if the birds are pierced through the nasal septum.

“Plastic spectacles fitted to the beak to prevent feather pecking or egg eating may cause significant damage to the nasal septum and should not be used except in response to a specific need in consultation with a veterinary surgeon. Any type designed to pierce the nasal septum is illegal in birds,” section 5.6 of the code of conduct reads. However, it is voluntary and does not apply overseas.

According to the activists who shot the video in Poland, there are hundreds of raised cages on the farm, each containing eight females and one male confined to a small box.

The females were fitted with saddles that protect their backs to keep them productive amid repetitive mating in order to produce eggs. Saddles are not mentioned directly in the code of conduct.

Campaigners claim they are considered a management device which is not to be used routinely and should be kept under review. However, the saddles are also sold openly in the UK and are not illegal.

The video has been released as the legality of releasing millions of non-native pheasants and partridges into the British countryside every year is under heightened scrutiny, while pheasant shooting was banned on public land in Wales earlier this year. The environmental consequences of grouse-shooting are also being looked at.

There were 35m pheasants released in 2004, growing to 47m in 2016, according to a study based on figures collected by the Game and Wildlife Conservation Trust, and campaigners expect the upward trajectory to continue. However, demand for the meat has not kept pace with the increasing supply and many pheasants are disposed of as waste.

A spokesman for the Polish pheasant farm told the Guardian that it bred pheasants in “decent conditions” that were compliant with Polish law, adding that “continuous veterinary care” was also provided. “In my business I observe all ethical standards related to the keeping of birds, their feeding, care and treatment,” he said.

Campaigners claimed the farm had expanded to meet the growing British demand, and the HSA and the League Against Cruel Sports have called for an end to the breeding of birds later used for sporting purposes in industrialised facilities where birds are kept in cages, which they say make up the majority of game bird farms. They have also called for the abolition of the shooting industry altogether.

“Around 43m pheasants are released into the British countryside each year and half of these start off life in factory farms in Europe. All this suffering is just to provide live targets for wealthy shooters to blast out of the sky,” said HSA spokesperson Lee Moon. “It’s cruel.”

Nick Weston, head of campaigns at the League, said the importation of intensively farmed game birds and ready-to-hatch eggs from Europe was fuelling the rapid expansion of commercial shoots across the UK.

“Millions of partridges and pheasants are shot out of the sky for entertainment every year, only to be thrown into incinerators, buried in pits or fly-tipped by the roadside,” he said. “We are calling for a ban on the import of ‘game’ bird chicks and eggs and we are campaigning to bring an end to the shooting of ‘game’ birds in the name of ‘sport’ across the UK.”

The British Game Alliance said it sought to improve animal welfare standards in the game sector and that it was already moving towards effective self-regulation in the UK through audits.

“It would breach internal market rules if we were to encourage a boycott of poultry imports from other parts of the EU,” said Thomas Adams, managing director. “We would urge the European Commission to raise game farming standards around the EU to the UK level.”

It is understood that Defra is exploring how to strengthen the regulatory system, but a spokesperson said the government was proud the UK had some of the highest animal welfare standards in the world.

The department was asked what resulted from a 2012 Defra study that set out to determine whether cage-based breeding could “meet the needs of game birds” – after the industry itself raised concerns that the practice was incompatible with its ethical values. It did not provide a direct response.

“The Animal Welfare Act 2006 already makes it clear that no animal should suffer unnecessarily,” Defra said. “In England, the legislation is backed up by a statutory Code of Practice, meaning those mistreating game birds and not complying with the law and the code can face prosecution.”

This article was first published by The Guardian on 14 August 2019.

Every autumn near where I live, as you drive through the countryside you see dozens of young pheasants and partridges just wandering around the roads in large groups. They are completely oblivious to cars and are totally unafraid of humans. They are literally ‘just sitting targets’ for the heartless, gutless, soul-less, moronic POS that think its great fun, sport and entertainment to blast them to death on the ground. (The birds can’t even fly, for God’s sake) At the end of the day, you can actually see piles of killed birds just dumped on the fields, left to rot by… Read more »

Anything said by peta should be subject to serious checking. They hire people to make videos that show what they want – which is not necessarily what is really going on. Their exposee video from Fairlife was totally created by them – they abused and videoed the abuse then sent it in as proof so charges could be made. Eye witness in court told the truth.

When will a Meteor hit and take the Stupid and the Evil out!!!.