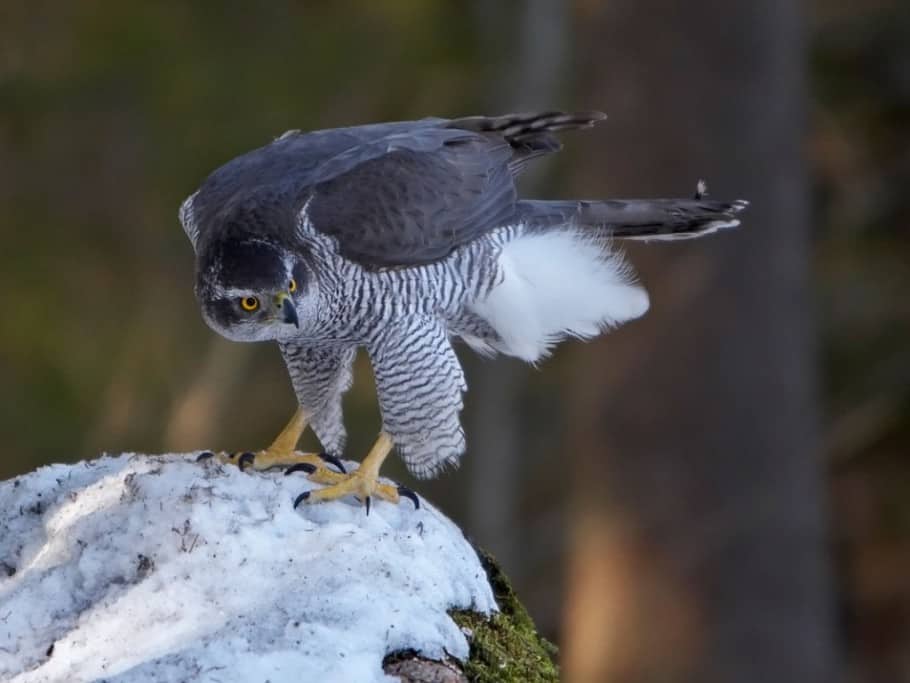 Goshawks single out “odd-coloured” pigeons as prey in large flocks to enhance their chances of a successful hunt, a study has found. Research by a University of Oxford team examined the so-called “oddity effect” that the birds of prey use to target feral pigeons in Hamburg, Germany.

Most feral pigeons are grey-blue but many flocks have a few white birds. Hawks that master the selective attack strategy are the best breeders, the study found. “Pigeons flock together particularly when being attacked, which makes it harder for hawks to single out an individual,” says research author Christian Rutz of Oxford University’s Department of Zoology.

He says the oddity effect might allow the predators to focus on a single target within a confusing, moving mass. “There is evidence that goshawks selectively target feral pigeons as a means to overcome confusion effects and carry out more successful attacks,” he says.

While the predominant colour of pigeons is a grey-blue, Mr Rutz says there are various different colour variations. But for the purpose of this study he categorised them simply as “white” and “non-white”, because “white birds really stand out”.

The research, published in the journal Current Biology, analysed data on the colour composition of Hamburg’s feral pigeons, the reproduction rates of goshawks and 2,000 plucked feathers from pigeon remains found near 35 goshawk nests.

Male goshawks prey on pigeons as well as other birds and small mammals during the breeding season. Once they have snatched a pigeon, they return to their nests to pluck it and to feed their young.

“The data shows [that] white birds are extremely rare – 1.6% of all colour-scored birds are white,” explains Christian Rutz. “[But] when I looked at my colour samples, more than 20% (of feathers) were white. “This shows that goshawks selectively remove these rare white birds,” he says.

The researcher says the study also shows a clear link between this foraging strategy and goshawks’ success at reproducing. “As they carry out more successful attacks, male goshawks have more food to take home to feed their nestlings, who grow faster earlier in the season, have higher energy, and develop better physically,” he says.

Very informative article. Since the white-coloured pigeons seem to get the attention of the Goshawk, a very efficient hunter, the ratio of 1.6% shall not increase.