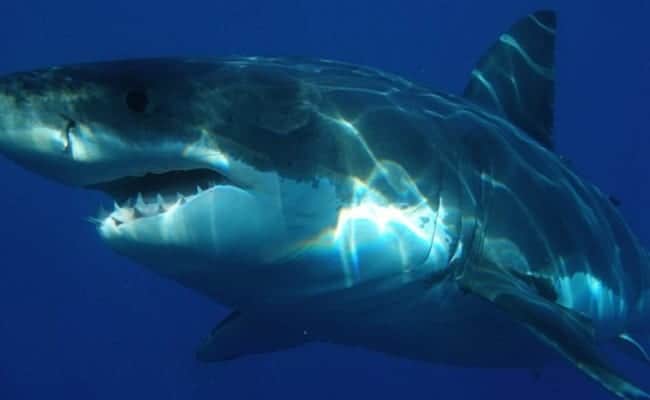 The Southern California coastline never used to be much of a hub for shark sightings, but that has changed this year. Great white sharks have been spotted from Long Beach to San Diego.

Hoping to catch a glimpse of some sharks for themselves last month, Chris Pica and three of his friends took a skiff about half a mile out from Dana Point Harbor. In less than a half hour, they were surrounded by great whites ranging in size from six to 11 feet long.

Sadly, one of the sharks was entangled in fishing gear. There was a hook in its mouth that was connected to a steel cable trailing monofilament fishing line, which had become partially wrapped around its pectoral fin and body. More snarled fishing line, stainless-steel fishing leaders and a small buoy trailed behind the shark.

But the shark was certainly in the right place at the right time. Pica is a boat captain who also happens to be a member of the National Oceanic and Atmospheric Administration’s Orange County whale disentanglement team. So is his friend Frank Brennan, who was also aboard the skiff.

“That must have been the luckiest great white in the ocean,” Pica told the Orange County Register. “What are the odds of us, part of NOAA’s whale disentanglement team, being out there?”

Although Pica is used to setting whales free from fishing equipment, this was the first time he disentangled a great white shark. Strangely enough, Pica thinks the shark was the same one he saw near the San Clemente Pier, about seven miles south of Dana Point, in March 2016.

California Department of Fish and Wildlife spokesman Andrew Hughan — who told the Orange County Register he’d never heard of anyone disentangling a great white shark before — believes that’s a possibility. “Great whites are fairly habitual,” he said. “The chance of it being the same one is theoretically possible.”

Since the shark was so close to the skiff, this time Pica decided to take the risk of freeing it, with a little help from his three friends.

He asked one of them to hold his beer and then went to work.

At one point the shark almost pulled Pica into the water. “I got a clean shot and managed to twist it, and this thing lit up, and he dragged me around the bow,” he told KABC. “Next thing you know, I’m like, ‘Mindy, grab my feet, quick.’”

Pica’s friend, Mindy White Laulhere, grabbed his legs, preventing him from going over the bow.

Thankfully, Pica was able to successfully cut all the fishing gear off the shark, and it calmly swam away. He said that although the shark freaked out a bit, none of the sharks were aggressive.

Great white sharks are a protected species in California. It’s illegal to fish for them in the state. However, Pica believes that’s exactly how the shark became entangled in gear that’s typically used for big game fishing.

The hook may have been intentionally set in the shark’s mouth, Hughan told the Register. “And in its panic, it swung under the pier and picked up some gear.”

Hughan praised Pica for putting his life in jeopardy to free the shark. “Wildlife doesn’t have rational thought,” he said. “If the shark has something in its mouth, it will swim as hard as it can to get away. That’s some brave stuff.”

Pica couldn’t be happier about freeing the shark. And if he ever sees another entangled great white shark, he said he won’t hesitate to do the same thing.

“They are a vital part of our ecosystem,” Pica told the Register. “Whether you like it or not, they are all part of God’s creatures.”