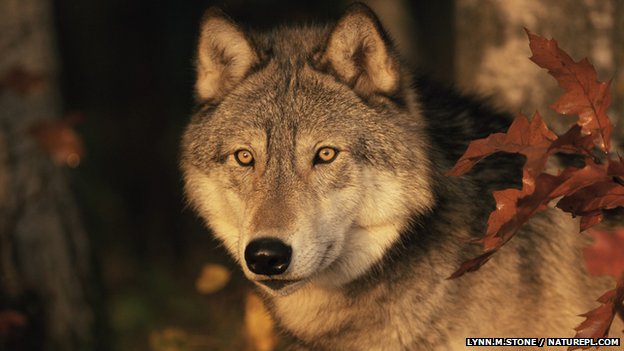 When a team of wildlife experts set out to film the return of wolves to the north west of the US, they first had to find the pack. So how did they track down these elusive creatures? “When you see a wolf track there’s no mistaking it. It’s just like bam, now that’s a wolf track,” said biologist and wolf-tracker Isaac Babcock.

He was working in the Cascade range of mountains with conservationist Jasmine Minbashian and wildlife cameraman Gordon Buchanan, following the fortunes of the Lookout pack, for a BBC and Discovery Channel co-production. The Lookout pack recolonised the land after moving south from a grey wolf stronghold in Canada, and were the first breeding pack of wolves in the mountains for more than 70 years.

For 20 of those, Jasmine has been working in wildlife conservation. “It has been that long that I’ve been hoping that wolves would return to the Cascade mountains, and sure enough they did,” she said. The mountains were a longstanding home to generations of the species until they were wiped out by settlers and hunters.

For the team to film their comeback, they had to track them down – and that was not easy, said Gordon Buchanan. “You’re just talking about a needle in a haystack and the haystack is enormous and the needle constantly moves around,” he said.

Human settlements in North America have driven wolves away, with some packs being hunted to the brink of extermination. But their scarcity makes sightings memorable for local residents and scientists – good leads for a wolf-tracker.

“You’re like a detective. You try and get all the evidence you can so the combination of tracks and howls and scat and reports…[and you] gather citizen information and that can also be really helpful in locating wolves and their packs,” said Jasmine Minbashian.

The trademark sound of a nearby wolf is their howl. Apart from humans, wolves used to have the largest natural distribution of any mammal and they use their howl to assemble the pack and communicate across their massive territories. But they also respond to an impersonated wolf howl, emanating from a human tracker. Isaac said wolves were “very forgiving” and that the impression did not need to be perfect.

“When you first get a response it’s just magic. You think wow, here they are, I want to keep talking to them, I want to keep howling.” But it is a technique to be used sparingly. “When you’re howling you’re telling them something and we don’t know exactly what,” he said.

Wolves communicate in sophisticated ways. Using a combination of growls, barks, whines and howls allows them to convey information, for example when hunting. This sort of pack behaviour is key to the success of a hunt because it enables the wolves to take down animals much bigger and stronger than a single wolf could manage.

Ungulates, such as deer, are the favoured prey of grey wolves in the Cascades. But where they cannot access their primary diet, wolves are highly adaptable and will eat smaller mammals, waterfowl and fish. The same characteristics that make wolves such excellent hunters and scavengers, are also what make tracking the pack such a daunting task.

Wolves can smell humans from over a mile away and hear them from even further away than that. “The main problem is they just cover so much ground. They can run 25km in a single night,” said Gordon. That means before long “the trail runs cold and you have to start all over again”.

A wolf pack is a family group with a mated pair at its centre. The alpha male and female are usually the oldest members of the pack and make the key decisions about when to hunt and where to go. New packs are most commonly formed when junior males move into a vacant territory and find a mate.

The source population behind the Lookout pack live in British Colombia. The move to new territory was not carried out by conservationists – the wolves made their way south on their own. But the team were reminded why wolves have struggled to maintain a presence in the area when they learned that 10 of the 12 members of the Lookout pack had been hunted down and killed.

The loss of the pack left Gordon searching for their ancestors to the north, while Isaac and Jasmine followed a tip-off from scientists to the south where DNA tests on a captured female showed that she was descended from the Lookout pack. The wolf was fitted with a radio collar and released in the hope that she would lead researchers to her pack.

To maximise the chance of getting pictures of the wolf population, Gordon used motion-sensitive camera traps throughout the trip. He also sprinkled wolf urine on the trees to lure them in. “It seems …[like] really clutching at straws when you start sort of anointing branches with the urine of another wolf but it does work,” he said.

“Their sense of smell is highly developed and that’s really how they navigate their landscape, through smell. So if they smell another dog, or another canine or another wolf, they’re curious, they’ll come check it out so that really improves your chance of getting a camera image,” Jasmine said.

To see a wolf in the wild, the best bet may be to find a site they return to and stake it out. Den and rendezvous sites are where some of the most intimate moments in the life of a wolf pack happen.

Female wolves build their dens during summer and make use of small openings in rocks or gaps behind thick vegetation. Wolves sometimes adapt a den from the stolen burrow of another, smaller animal. Unless the den is disturbed or collapses, wolves will continue to use the same site for many years, even passing it on to successive generations.

Rendezvous sites can often be found near the den and are used in the summer months once the pups have outgrown the den but before they are big enough to keep up with the pace on a hunt. The sites are a bit like a pre-school for pups, Jasmine said.

“It’s close to the den, it’s somewhere where they have safety and can be looked after, maybe by another member of the pack while the other members go off hunting.” In the autumn once the pups are big enough, the sites are abandoned. It is difficult to know exactly where an active rendezvous site is going to be.

They tend to be open grassy areas with a ready supply of water nearby and plenty of tree cover in which to hide. Trackers like Isaac know one when they see one. It was at one of these sites that Isaac made an exciting discovery. Further south in the Cascades than wolves had been for over a century, searching for the radio-collared female, he came across the young descendants of the Lookout pack.

The pups he filmed at the rendezvous site prove that a breeding pack has established itself in the Cascade range. Isaac said he believed that watching wolves at such sites had the power to change the way the species was viewed.

“It wasn’t until I started tracking them, and especially around rendezvous sites, where I suddenly found that I could kind of sit back and hide and watch them a little bit and see this part of the wolf’s life that I wasn’t that familiar with before. “I kind-of discovered that they are just extremely social family animals.”

The BBC and Discovery Channel co-production Land of the Lost Wolves is on BBC One at 21:00 on Thursday 5 April and will be on Discovery in the US at a future date.

This article was written by Matt Bardo Reporter, BBC Nature