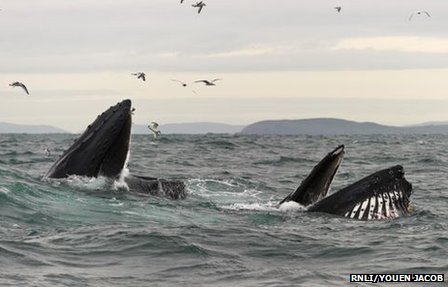 The mammals have been creating a stir off Baltimore in west Cork in the Irish Republic for the last two weeks as they feed on shoals of sprat and herring.

There are five animals in the humpback group and they have been getting a lot of attention, with reports in Ireland’s national newspapers and segments on the state broadcaster RTE.

The Irish Whale and Dolphin Group have been monitoring the group and believe that four of them have visited the same waters off west Cork in the past, some as recently as 2008.

“It is known from the western Atlantic that humpback whales form stable social associations with other whales on the feeding grounds, so this is not just a coincidence,” the IWDG website said. People have been getting up close to the denizens of the deep, which were once hunted to the brink of extinction, on boat trips from local harbours.

Simon Duggan is a local photographer and went out with friends to see what they could capture. As can be seen from his picture he was luckier than the group on another boat, who appear to all be looking the wrong way. “Bad weather had stopped us going out, but there was a break on Saturday so we went out,” he said.

“We’d been out for a few hours and had been watching them when this one started to breach. “It’s a pretty amazing sight, there are minke whales, fin whales and lots of dolphins and harbour porpoise, but the humpbacks are rarer.” Mr Duggan got the shot because he was in the right place at the right time. He and fellow photographer Youen Jacob were looking for the whales and on this occasion Mr Jacob was steering the boat.

Both men are volunteers with the RNLI in at Baltimore Lifeboat Station and get to spend a fair amount of time at sea. He said the animal breached about six times, so the watchers on the other boat may have been able to catch the repeat performance. Mr Duggan said that whale watching is a popular activity in the area in the winter months.

“There really isn’t a lot to do in Baltimore during November and December so it’s become a bit of a hobby for me and some friends and occasionally you get to see this sort of thing.” They were photgraphed bubble feeding by Mr Jacob last week, a technique which sees the whales going under a school of fish and releasing bubbles to confuse the fish and bunch them together.

Then the whales surge upwards through the school with mouths wide open so they can scoop as many fish as possible. The IWDG said the scenes of the animals bubble feeding were remarkable, but that while the viewing off Cork was spectacular it was not without precedent.

On its website the group said that there was going to be increased demand on whale watching boats because of the increase in activity, but that it was taking place so near to shore that a pair of binoculars would be enough to enjoy the show.

This article was written and published by BBC News Europe on 3rd December 2012.