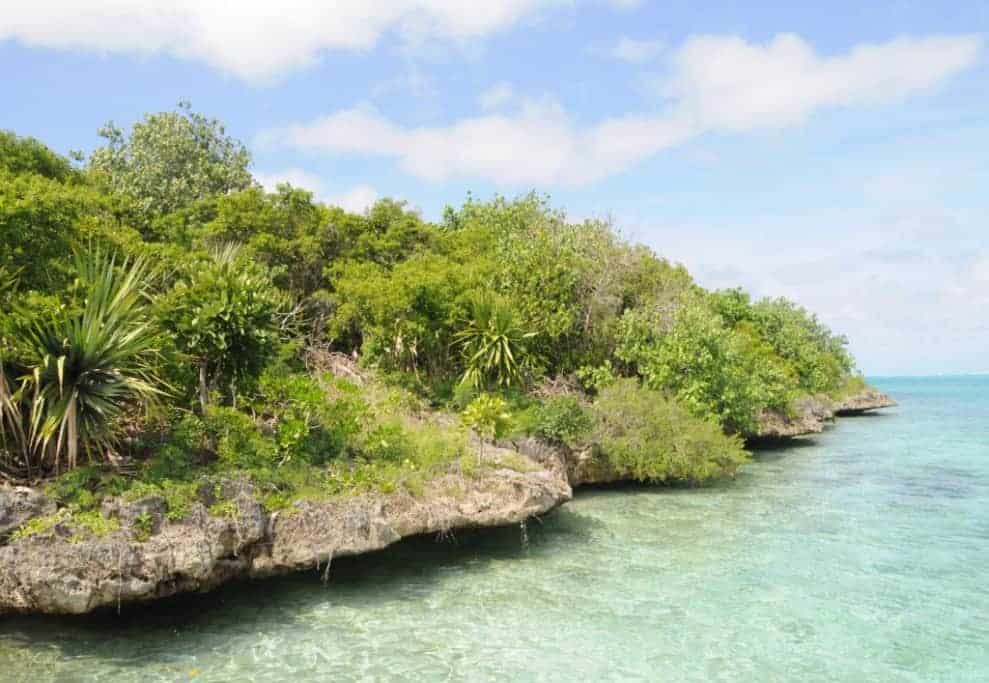 Ile aux Aigrettes is a tiny coral island 800 metres off the south-east coast of Mauritius near the small town of Mahebourg and has been declared a nature conservation site (1965) run by the Mauritian Wildlife Foundation since 1987. The island is 26 hectares in size and is made of coralline limestone partially overlain by sand and soil deposits and is the last refuge of dry, coastal forest remaining on Mauritius. The island is reached by boat, and since 1997 guided tours given by the Mauritian Wildlife Foundation, have been given on how this island is being returned to its original state before man and new species were introduced. The tours last 90 minutes and many interesting endemic plants, animals & birds can be seen. The main objective of the tour is to help finance the Ile aux Aigrettes restoration programme and raise awareness about the conservation work undertaken by the Foundation. The foundation is an independent and non-profit making organization which depends entirely upon donations and grants to fund its projects and volunteers to help out with the workload. We visited the island in April 2012 and saw most of the animal and birds including the Ornate Day Gecko Phelsuma ornata, Telfair’s Skink Leiolopisma telairii, Aldabran Giant Tortoise Aldabrachelys gigantea, Pink Pigeon Nesoenas mayeri, Mauritius Fody Foudia rubra & Maritius Olive White-eye Zosterops chloronothus.

In 1985 the Mauritian Wildlife Foundation set up a habitat restoration project for Ile aux Aigrettes with the aim of restoring this unique habitat. The main aims of the project were to remove all exotic species of plants from the island & spread and replant indigenous species of Mauritian fauna. Eradicate shrews, rats, cats and mongooses who feed on the seeds of certain plants and the eggs of the native birds, which was achieved in 1991. Then to reintroduce the endemic species of the birds of reptiles of Mauritius on to the island and help restore the unique habitat to its natural state of 400 years ago. Over 30 Mauritius Kestrels Falco punctatus, formerly regarded as the world’s rarest bird, were reintroduced to the island between 1990 and 1994. The Mauritius Kestrel, now visits the island only on rare occasions, preferring instead the nearby Bambous Mountains on the mainland, but in spite of the fact that a population has not become established on Ile aux Aigrettes, Mauritius Kestrels now number between 800 and 1000 on the main island and are considered one of the MWF’s greatest success stories after standing on the brink of extinction with only 4 individuals left in the wild in 1974. In 1994, an aviary was set up on the island & 35 Pink Pigeons Nesoenas mayeriwere reintroduced, with this population having increased over the years from 35 to approximately 85 and currently represents 20% of the world’s remaining population, being 1 of only 5 sub-populations of this vulnerable species. The population on the island is now thought to be at the maximum number sustainable for an island of this size.

In 1997, a Nursery was built for the production of endangered native plants for replanting on the island & the Nursery produces about 30,000 plants per year of which most are planted on Ile aux Aigrettes during the rainy season (February to April). To date 20 endangered endemic plant species have been introduced to the island, including the critically endangered Round Island Bottle Palm and the Round Island Hurricane Palm, of which only one adult tree remains. Mauritius previously had two species of endemic tortoises, but these became extinct about 200 years ago through excessive predation by man. In 2000, eighteen Aldabran Giant Tortoises were released on the island to simulate the impact of browsers on the island’s vegetation and after twelve years, the introduced tortoises are serving as an ”effective seed disperser” for helping re-growing endangered tree species, primarily ebony, in the Ile aux Aigrettes nature reserve. This is because the process of passing the fruits and seeds through a tortoise’s gut helps improve seed germination.

In 2005, forty five hand reared Mauritius Fody Foudia rubra chicks were released onto the island, where two pairs from previous releases have raised chicks. Following that success, in 2006, another 40 young fledged on Ile aux Aigrettes and the total population on the island in December 2008 was 152 individuals, including 47 pairs. The following few years also saw good breeding success and the population is expected to increase further, in fact, the Fodies have done so well that they will be used as the source population for a new sub-population to be reintroduced on Round Island (north of Mauritius).

Between December 2006 & March 2007, sixteen Mauritius Olive White-eyes Zosterops chloronothus were released on the now predator free island & 22 further birds in December 2007 aimed to further the establishment of a small sub-population on Ile aux Aigrettes of this critically endangered species which in 2001 had a global population of 93 – 148 pairs all in the Black River Gorges area of Mauritius. The Ile aux Aigrettes sub-population is closely monitored and provided with supplementary food, and the first fledglings were produced in 2008. In 2010, 14 fledglings were produced from five breeding pairs, and the total population currently stands at 25 individuals. The close monitoring of the island and the reintroduction of some critically endangered birds and animals has been a huge success on the island and the Mauritian Wildlife Foundation, a non-profit making NGO, should be commended for its work. If you would like to help the project in any way including volunteering, please see the link here ‘Support the MWF’.