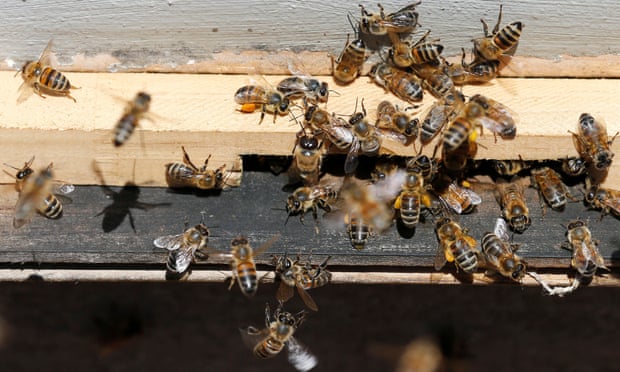 The “unnoticed insect apocalypse” should set alarm bells ringing, according to conservationists, who said that without a halt there will be profound consequences for humans and all life on Earth.

A new report suggested half of all insects may have been lost since 1970 as a result of the destruction of nature and heavy use of pesticides. The report said 40% of the 1 million known species of insect are facing extinction.

The analysis, written by one of the UK’s leading ecologists, has a particular focus on the UK, whose insects are the most studied in the world. It said 23 bee and wasp species have become extinct in the last century, while the number of pesticide applications has approximately doubled in the last 25 years.

UK butterflies that specialise in particular habitats have fallen 77% since the mid-1970s and generalists have declined 46%, the report said. There are also knock-on effects on other animals, such as the spotted flycatcher which only eats flying insects. Its populations have dropped by 93% since 1967.

But conservationists said that insect populations can be rescued, by introducing firm targets to cut pesticide use and making urban parks and gardens more wildlife friendly. Scientists said insects are essential for all ecosystems, as pollinators, food for other creatures, and recyclers of nutrients.

“We can’t be sure, but in terms of numbers, we may have lost 50% or more of our insects since 1970 – it could be much more,” said Prof Dave Goulson, at the University of Sussex, UK, who wrote the report for the Wildlife Trusts. “We just don’t know, which is scary. If we don’t stop the decline of our insects there will be profound consequences for all life on earth [and] for human wellbeing.”

Studies of insect populations over decades are scarce, he said: “But the overwhelming weight of evidence that exists suggests the rapid decline is a real phenomenon. It really worries me to hear people say we need more long-term studies to be sure. That would be great, but we can’t wait another 25 years before we do anything because it will be too late.”

Gary Mantle, chief executive of Wiltshire Wildlife Trust, said: “This unnoticed apocalypse should set alarms ringing. We have put at risk some of the fundamental building blocks of life. But insects and other invertebrates can recover quickly if we stop killing them and restore the habitats they require to thrive. We all need to take action now in our gardens, parks, farms, and places of work.”

The planet is at the start of a sixth mass extinction in its history, with huge losses already reported in larger animals that are easier to study. But insects are by far the most varied and abundant animals, outweighing humanity by 17 times.

Insect population collapses have been reported in Germany and Puerto Rico, and the first global scientific review, published in February, said widespread declines threaten a “catastrophic collapse of nature’s ecosystems”.

Insects can be helped to recover by“rewilding” urban gardens and parks, Goulson said. “There is potential for a huge network of insect-friendly habitats right across the country. Already a lot of people are buying into the idea that they can make their gardens more wildlife friendly by letting go of control a bit. There are also quite a lot of councils going pesticide free.”

But he said: “The bigger challenge is farming – 70% of Britain is farmland. No matter how many gardens we make wildlife friendly, if 70% of the countryside remains largely hostile to life, then we are not going to turn around insect decline.”

The report called for the introduction of binding targets for pesticide reduction in farming and for support for farmers to reach them. This could be funded by a tax on the chemicals –Sweden has had such a levy since 1984, and France, Italy and Denmark now also have charges.

Virtually all farms could significantly cut their pesticide use while still producing as much food, according to a 2017 study. The research also showed that chemical treatments could be cut without affecting farm profits on three-quarters of farms.

Matt Shardlow, chief executive of the charity Buglife, said: “The very latest research shows that quality habitats [in the UK] are so isolated that most invertebrate species are failing to move north to keep track with the climate envelope in which they can survive. Restoring networks of habitats for insects is now a number one priority.”

Goulson said the UK’s departure from the European Union means large-scale change is possible: “Whatever people think of Brexit, there is this potential opportunity to completely revise our farming system.” He said giving funds for boosting nature and other public goods, rather than simply owning land, was a really exciting possibility.

This article was first published by The Guardian on 13 November 2019.