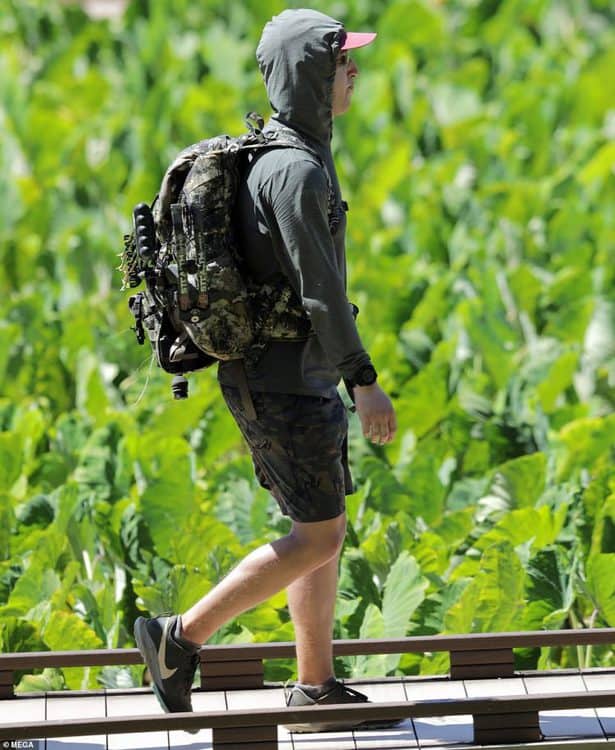 It’s so long Menlo Park, and hello Hawaii for Facebook CEO Mark Zuckerberg who was seen hiking in full camo with hunting gear to catch wild boar on Wednesday after telling he’s going to work remotely for another six months and they can too.

Zuckerberg and his wife Priscilla own property in Hawaii and have plans to expand on it to create a compound-like home. They’ve been spending most of their time there since COVID-19 shut down the world last year, and Zuckerberg seems to be very much enjoying all the outdoor space.

He’s taken up archery and hiking. Earlier this week he shared a bizarre video of himself throwing spears.

DailyMail.com obtained exclusive photos of the tech CEO on Wednesday hiking the Kalalau Trail on the paradise island of Kauai.

Despite soaring temperatures, he had the hood of his waterproof jacket up and a backpack tied around his waist which had a bow and several arrows in the back.

In the past, he has spoken of his love of hunting wild boar. There are hundreds, if not thousands, of feral pigs on Hawaii which eat plants and are a nuisance to homeowners.

Hunting them is allowed on the Kalalau Trail, and so is wild goat hunting.

In a Facebook comment to a fan last year, he said: ‘I still go hunting. Mostly with a bow and arrow.’ When asked what he hunted, he said: ‘Wild boar.’

Zuckerberg’s enthusiasm for the outdoors in Hawaii is no doubt tied to his decision to keep working remotely for another six months.

Zuckerberg is not planning on reopening Facebook’s offices fully until October.

This article was first published by The Daily Mail on 10 June 2021. Lead Image: Hawaii is known for its feral pigs and hunting them is allowed, even on the trail Zuckerberg was on.