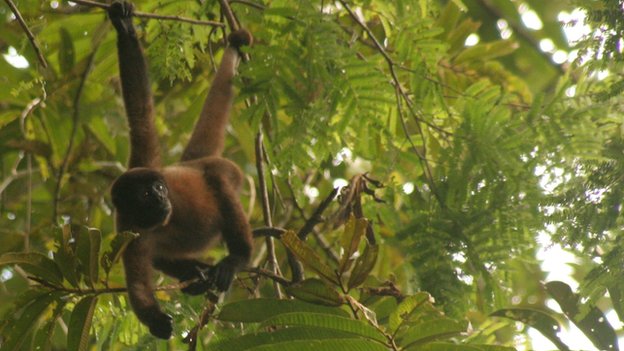 Woolly monkeys can identify human hunters by their behaviour, research has revealed. Poeppig’s woolly monkeys live in the rainforests of Ecuador, Peru and Brazil but are vulnerable to hunting by the local Amazonian people. Scientists investigating how the monkeys respond to threats found that they acted differently depending on the behaviour of humans in the forest.

The results are published in the online journal PLoS One. Woolly monkeys are named for their thick covering of fur and are found in the rainforests of South America. According to the International Union for the Conservation of Nature, all four species are hunted for food.

To understand how the monkeys responded to this threat, researchers from Imperial College, London, UK travelled to Ecuador to study the behaviour of Poeppig’s woolly monkeys. 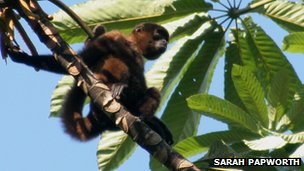 “We worked with wild woolly monkeys [and] presented them with a person behaving as a hunter, gatherer or researcher at two sites with differing hunting pressure,” explained PhD student Sarah Papworth, co-author of the paper.

Gatherers are local people that collect food and materials close to settlements and researchers are academics studying the forest and the animals living within it. “After seeing a hunter, woolly monkeys are quieter, move less and are less visible than when seeing non-hunters.

“This cryptic response makes sense as human hunters may chase after their prey, and use projectile weapons such as guns and blowpipes even if they run away, so the best strategy for a monkey is to try and avoid being seen.”

Ms Papworth added that visual clues were not necessarily what tipped the primates off to the hunters’ plans. “Blow pipes are over two metres long and only carried by hunters so may be a reliable cue of lethal intent.

“But as woolly monkeys are up in the canopy and their view may be blocked by leaves and branches, they may use other cues, such as noise level, or a variety of different cues.”

Comparing the reactions of monkeys in an area associated with high levels of hunting and a part of the forest where monkeys were under lower hunting pressures, Ms Papworth made a further discovery.

Monkeys in the higher risk area were quiet when gatherers were nearby. But they made more vocalisations when researchers were present whereas monkeys in “safer” areas hid from researchers and not gatherers.

Ms Papworth suggested that, due to their distance from human settlements, this could be because the monkeys were unfamiliar with gatherers. The findings suggest monkeys’ anti-predator behaviour is more flexible than previously thought.

“Most previous work on primate reactions to predators has focused on animal predators and African monkeys, and suggested a much less flexible behavioural response to predation,” she explained.

However, this flexibility may not be enough to protect the monkeys’ future. “It could allow individuals to persist in heavily hunted areas,” said Ms Papworth. But the long term value this offers to species may be limited.

To avoid being hunted, woolly monkeys have to avoid being seen by hunters all the time. Whereas the hunter only has to be successful once, she added. So “the level of protection it offers to vulnerable species may be low in the long term.”

This article was written by Ella Davies Reporter, BBC Nature