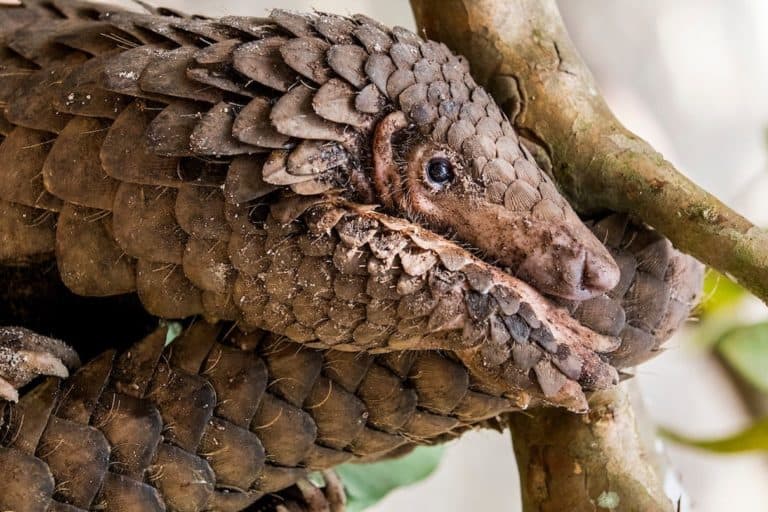 In 2019, Hong Kong customs authorities inspected a cargo ship bound for Vietnam. Hidden beneath slabs of frozen meat were 8.3 metric tons of illegal scales from about 13,800 pangolins, and more than 2.1 metric tons of tusks from about 200 elephants, with a combined value of about $8 million.

This was one of the largest wildlife seizures in Hong Kong history, but far from an isolated incident. In 2018 and 2019, Hong Kong authorities confiscated more than 649 metric tons of illegal wildlife and wildlife products across 1,404 seizures, according to a new report by Hong Kong’s ADM Capital Foundation (ADMCF).

Wildlife crime is so rampant in Hong Kong that its wildlife seizures for 2019 equated to about a third of all wildlife seizures in mainland China — a jurisdiction more than 866% the size of Hong Kong and with about 1.4 billion more people living in it.

While many of these seizures resulted in prosecution and conviction, some of the biggest cases — including the 2019 pangolin and ivory seizure — have gone unpunished, possibly due to a lack of evidence.

The report also notes that authorities haven’t laid any money-laundering charges for the 2,542 wildlife trafficking cases seen in Hong Kong between 2015 and 2019, despite these seizures amounting to 1,900 metric tons of wildlife worth a combined $73 million.

A new bill may change all of this. Legal experts have put forward a draft law that would allow wildlife crimes to be dealt with under Hong Kong’s Organised and Serious Crimes Ordinance, rather than being handled under other mandates, such as the Endangered Species of Animals and Plants Ordinance, as it is now. Advocates of the bill say this change would enable authorities to undertake more thorough investigations of wildlife crimes and authorize harsher penalties.

The bill, which was first proposed by Hong Kong legislator Elizabeth Quat in November 2020, has yet to pass into law. But experts say it’s likely to proceed due to a considerable amount of political support.

“It looks positive,” Sophie le Clue, director of environment at ADMCF, the organization that co-authored a white paper that provided the basis for the new bill, told Mongabay in an interview. “If Hong Kong does do this, I think it’s quite a big signal globally.”

The wildlife trade is a lucrative business. In the past 14 years, the legal trade of wildlife increased fivefold in value, with an estimated worth of about $107 billion globally in 2019. Lurking in its shadow is the illegal wildlife trade, which generates about $7 billion to $23 billion each year.

The new report published by ADMCF reveals the substantial role that Hong Kong has played, and continues to play, in the illegal wildlife trade. The volumes of wildlife seizures in Hong Kong in 2018 and 2019 exceeded all annual totals for the past decade, except for 2015 when authorities seized about 1,008 metric tons of Malagasy rosewood. Of course, these numbers only refer to shipments that were detected — a lot more slip under the radar, says Sam Inglis, wildlife program manager at ADMCF.

“Wildlife crime in Hong Kong is going as strong as ever,” Inglis told Mongabay in an interview. “Seizures by volume have continued to be very, very high. In 2018 and 2019, we saw an elevation from what had already been pretty high levels of volumes.”

The report shows that the illegal trade of pangolins — often referred to as the most trafficked mammals on Earth — have persisted in large volumes. In 2018 and 2019, Hong Kong authorities confiscated the scales and bodies of as many as 50,200 pangolins, which is the equivalent of a pangolin being poached every 21 minutes just the Hong Kong trade.

“It’s pretty catastrophic,” Inglis said. “We’re not a large city, so we shouldn’t really be one of the leading hubs for the trade that’s driving the extinction of a single taxonomic group.”

The COVID-19 pandemic hasn’t slowed anything down. According to ADMCF’s preliminary estimates, authorities seized about 279 metric tons of wildlife products in 2020, including 26 metric tons of shark fins, 1 metric ton of pangolin scales and 160 kilograms of totoaba. This is a slight drop from 2019, but the volumes were still higher than 2018, ADMCF said.

“The levels are high, they’ve remained high despite the pandemic,” Le Clue said. “In fact, the last decades have been at the highest [levels] except for one year. So there’s a continuing trend of increasing seizures.”

This year, there have already been two notable wildlife seizures, including 1 ton of CITES-regulated shark fins and more than 1,200 tons of illegally trafficked rosewood — the largest wood seizure since 2015.

‘The tides are not stopping’

When prosecution follows a seizure in Hong Kong, the people who usually end up behind bars are the so-called mules, the people moving the illegal products across borders, according to the report. In contrast, the criminal masterminds behind these offenses tend to remain free.

“We’ve come to the view that this must be because we’re targeting the wrong people,” Amanda Whitfort, a barrister and law professor at the University of Hong Kong who drafted the new bill, told Mongabay in an interview. “We’re targeting the mules, the people that are replaceable, the people who’ve got 50 kilos … of rhino horn or scales of pangolins in their luggage. But we’re not getting the criminal syndicates that are behind this very lucrative transnational crime.”

An example of this is the 2018 conviction of a woman identified in the report as a “part-time salesperson and housewife,” who allowed smugglers to use her personal address to process an illegal shipment of 29 metric tons of Honduras rosewood. The woman was ultimately sentenced to three months in prison, but as the report suggests, she wasn’t “the mastermind behind the crime or the chief beneficiary.”

Some of the biggest wildlife crime cases, including the seizure of 7.2 metric tons of elephant tusks in July 2017 and the confiscation of 82.5 kilos of rhino horns in April 2019, did not result in any prosecution, the report says. Yet these very cases have been cited by Hong Kong’s Security Bureau as laudable examples of the Syndicate Crimes Investigation Bureau’s “determination and capacity to conduct in-depth investigations in wildlife smuggling and combat organized crime networks.”

“We’ve had three years of more deterrent sentencing, and still the tides [of illegally smuggled wildlife] are not stopping,” Whitfort said.

Right now, the majority of wildlife crimes are charged under the Protection of Endangered Species of Animals and Plants Ordinance, which is managed by Hong Kong’s Agriculture, Fisheries and Conservation Department. But this department doesn’t have the ability to conduct thorough investigations, says Jovy Chan, manager of wildlife conservation at WWF-Hong Kong.

“The department does not have investigative power to take [a] ‘follow the money’ approach to identify the syndicate and kingpins that are involved in these illegal wildlife activities,” Chan told Mongabay in an email. “This is one of the prime reasons why there is no prosecution in some major seizures. Or there are only mules being sentenced.”

By making wildlife crimes subject to the provisions of Hong Kong’s Organised and Serious Crimes Ordinance, authorities would have the ability to conduct more in-depth investigations into money laundering and other criminal activities, and be able to freeze assets, demand more kinds of documentation, and even take away offenders’ right to silence, Whitfort said. Penalties for these crimes would also be much harsher, she added.

“Of course we think [including] wildlife crime into OSCO [Organised and Serious Crimes Ordinance] will change the current dire situation,” she said. “That’s why WWF-Hong Kong has urged the government to empower our wildlife legislation over the years.”

In March 2021, the bill was discussed in the Legislative Council Panel on Environmental Affairs. In May, it was approved by Chief Executive Carrie Lam, Hong Kong’s head of government.

Whitfort said Lam’s support was a “crucial” step in the process. “The chief executive has to say ‘okay,’ because obviously, government resources can’t be allocated to something without her say so,” she said.

In the next step, the bill will return to the Legislative Council (LegCo) for plenary discussions.

Le Clue said she is “cautiously optimistic” that the bill will pass since there is “no real opposition” to it right now.

But Whitfort says real change will depend upon adequate enforcement through Hong Kong customs, police and other authorities.

“It’s not enough for the legislation to get changed,” she says. “You’ve got to then have the authorities using it.”

This article by Elizabeth Claire Alberts was first published on Mongabay.com on 26 May 2021. Lead Image: A pangolin caught up in the wildlife trade in Indonesia. Image by Paul Hilton / Earth Tree Images.