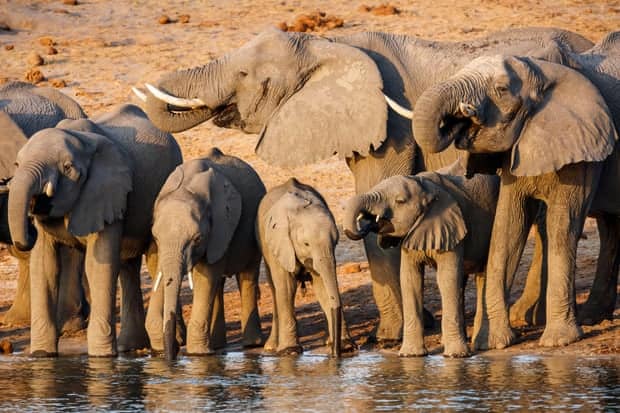 Tens of thousands of African elephants are under threat from plans for a massive new oilfield in one of the continent’s last great wildernesses, experts have warned.

Campaigners and conservationists fear the proposed oilfield stretching across Namibia and Botswana would devastate regional ecosystems and wildlife as well as local communities.

The plans are the latest threat to elephants in the region, hundreds of which have died mysteriously in the past year. Scientists are trying to find the cause of the deaths but believe they may be linked to a rising amount of toxic algae – caused by global heating – in their waterholes.

“It is incomprehensible that ReconAfrica’s hunt for fossil fuels is going ahead,” said Rosemary Alles from Global March for Rhinos and Elephants.

“Fewer than 450,000 elephants survive in Africa, down from millions not so long ago: 130,000 of these have established this region as a home range, and ReconAfrica’s misbegotten plans place them at direct risk.”

ReconAfrica, a Canadian oil and gas company, listed on stock exchanges in Canada, the US and Germany, has leased more than 34,000sq km of land in the Kavango Basin. Seismic exploratory work has begun, and experts say the new oil field could be one of the biggest of recent years. ReconAfrica estimates that the “potential oil generated” could be between 60 billion and 120 billion barrels – and be worth billions of dollars to the regional economy.

The Namibian government said only exploratory licences had so far been granted which did not allow any production operations. It said the exploratory wells were not located in any “conservancy or environmentally sensitive area and will have no significant impact on our wildlife”.

But scientists, environmentalists and local communities say the project could jeopardise critical water supplies and threaten the Okavango Delta in Botswana, a huge pristine wilderness and World Heritage Site.

“Every element of this process – from new roads to drilling sites, refineries to terminals – will devastate the ecosystem and the local communities that depend on it for farming and fishing,” said Nnimmo Bassey, director at the Health of Mother Earth Foundation and chair of Oilwatch Africa. Alles said vibrations from exploratory work are known to disturb elephants, and the increase in construction, roads and traffic would not only drive the animals away but also open the area up to poachers.

“Especially when they have young, they avoid areas where there is any human activity, where there is noise and what they see as danger. This can drive them away from their ancient migratory routes and closer to villages and agricultural areas, leading to more human-elephant conflict.”

Alles added: “There’s a profound irony here. Here we are with hundreds of elephants dying from an algae bloom caused by climate change, and a few kilometres away they want to start drilling for yet more oil.”

ReconAfrica argues that the project will bring jobs and huge economic benefits to the region without harming the environment.

“We sincerely believe that the region’s stable energy industry can be developed in an environmentally and socially responsible manner that is accountable and supports the development and delivery of much-needed economic and social benefits, as well as funding investments in local wildlife and ecological conservation,” said a company spokesperson.

They said there were “measures in place” to address noise and vibration issues, adding that they had installed solar-powered community water wells, were using water-based, biodegradable and chloride-free drilling fluids and would use low-frequency equipment to “protect wildlife communications” They would not “operate at night, when elephants typically communicate”.

“We are committed to continuing to work closely with, and under the direct oversight of, the governments in both countries, as well as their regional and traditional authorities, to ensure we continue to comply with relevant laws and regulations throughout all the stages of our operation,” they added.

Last month, the International Energy Agency said the exploitation and development of new oil and gas fields must stop this year if the world is to stay within safe limits of global heating and meet the goal of net zero emissions by 2050.

Experts say that extracting billions of barrels of fossil fuels from a giant new oil field in Africa would directly contradict that finding – with potentially disastrous consequences for the climate emergency.

Fridays For Future – Windhoek, an environmental group based in the Namibian capital, has called the oilfield a “carbon gigabomb”, and campaigners fear that it could act as a gateway for other projects in southern Africa if it goes ahead.

Ina-Maria Shikongo, one of the group’s co-ordinators, said the region was already being hit by droughts and excessive heat and that climate refugees, looking for food and work, were becoming more common.

She said the planned oilfield – like slavery and colonialism – was based on the global north exploiting resources and people in the global south for their own ends. “Today we call it capitalism but the system has not really changed at all – it is a system based on exploitation.”

Some figures in the Namibian government have said western critics whose own countries got rich from exploiting their natural resources had no right to stop Namibia doing the same.

However, Bassey said the extraction of oil would not bring prosperity to the Namibian people, adding that the whole world would have to move away from fossil fuels in the next decade to avoid climate breakdown.

“It is essential to understand that we cannot afford to replicate the methods and pathways used by the west to get to where they are today.”

He said there was a need to “ensure justice in the transition from dirty energy”, and that western nations should offer financial support to keep fossil fuel resources in the ground by paying an “ecological or climate, debt” that would allow countries like Namibia to “build resilience and follow a development path that is in line with planetary limits”.

“Searching for new oil wells at this time simply means searching for trouble for our nations and for the planet.”

This article by Matthew Taylor was first published by The Guardian on 20 June 2021. Lead Image: Water supplying the Okavango Delta, crucial to the survival of elephants, could be jeopardised. Photograph: Hemis/Alamy.