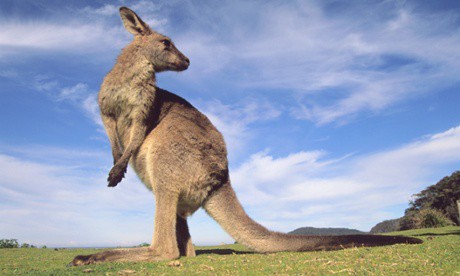 Two leading animal campaigning groups – Viva! (Vegetarians International Voice for Animals) and AWPC (Australian Wildlife Protection Council) – are contacting the sports retail giant Nike to congratulate them on taking an ethical decision that could save the lives of thousands of kangaroos.

A Nike spokesman confirmed yesterday that they would stop using the skins of kangaroos in their football boots: “We are moving towards eradicating the use of kangaroo leather altogether”*. The move by Nike came after the campaigning groups’ exposé showing that internationally renowned players at the World Cup were playing in boots made from kangaroo skins or using their names to promote them. These include Wayne Rooney, Frank Lampard, John Terry, Joe Cole and Michael Carrick**.

Millions of adult kangaroos are shot in the Outback in Australia each year for their meat and skin. Also it is estimated that as many as 440,000 orphaned baby kangaroos (joeys) are decapitated or beaten to death every year, then discarded as ‘waste’.

Nike own British sports company Umbro – which also uses kangaroo leather – and they will also be encouraged to extend the policy to them. The AWPC and Viva! will also contact Adidas and Puma, both of which widely use kangaroo leather.

The news from Nike has boosted the campaign to ban the sale of kangaroo parts across the EU, which was already making headway. Last week both Philip Woolley, EU Campaign Director for the Australian Wildlife Protection Council and Justin Kerswell, Campaigns Manager for Viva! were invited to go to the European Parliament in Brussels to discuss their concerns. In fact, 62 per cent of support for a ban is coming from within the EU.

Woolley said: “Nike’s ethical decision is to be welcomed. It is heartening that ahead of a possible EU ban on all kangaroo products, sports manufacturers are waking up to the cruelty behind this horrific industry and are unilaterally distancing themselves from it. We know that once people hear about the bloodshed and misery behind the trade in kangaroo skins they want no part of it, and we predict that the sales of football boots made from it will soon plummet.”

Kerswell said: “It is fantastic news that Nike are planning to kick cruelty out of football – and not a moment too soon. The use of kangaroo skin for football boots is a scandal that has gone on too long. It also leaves no excuse for other companies to continue participating in the largest massacre of wild land animals on the planet today. Many people don’t even know they are buying boots made from kangaroo skin, as it is often hidden under pseudonyms such as k-leather. Most would be horrified that their World Cup and League hopes and dreams – not to mention even their five aside kickabouts – are being propelled by this slaughter. We are delighted that Nike are getting out now before an EU ban, as it perhaps shows they know they cannot defend the indefensible: the killing of baby animals for a sports boot.”

** Rooney: http://www.prodirectsoccer.com/prodinfo.asp?PID=PDS-002-009-A20&DEPT=2&BRAND=9&SS=1&PROFILE=Power (note: Rooney himself wears a synthetic version of the boots, but his name is being used to promote kangaroo leather versions)

– David Beckham kicked off his kangaroo leather boots in 2006 after Viva! sent him graphic footage showing the slaughter of the wild animals: http://www.dailymail.co.uk/femail/article-479127/Stella-McCartney-militant-vegan-joins-forces-Adidas-company-profits-bloody-slaughter-kangaroos.html

– On average 20 per cent of kangaroos killed annually (1.9 million in 2009) it can be estimated that some 20 per cent are females. This means some 440,000 baby kangaroos therefore are killed each year as a result of killing the female. (some 8.2 million baby kangaroos have been killed since 1991).

– Meat is banned from import into Russia (August 2009 to present day) on health reasons due to contaminated shipments.

– Other kangaroo products such as skins are sold as salted, pickled or finished skins, used primarily for high performance soccer boots worn by international players, mainly manufactured by Adidas. Dog leads are also sold in the UK which are made from kangaroo skin.

This article was written and published by Viva.org.uk

Please NEVER buy anything made from animals. There is no need for this. I would never support, promote and encourage animal use, abuse, tortures,slavery and murders just to have stuff that will go out of fashion the next season and be tired of wearing it too!!! The money to spend for “leather”it is another story…I’d rather donate and feel good!!! We have many alternatives, options and choices the animals have none!!!

It is about time!!!This should have never be allowed in a first place!!!Mind blowing!!!???

I think there are other reasons that Nike have stopped using what they call K leather.Both Adidas and Nike boots both after a short time of use start to smell very strongly of a mouldy smell of what can only be described as cats pee after they become wet unfortunately it just becomes worse with use,and my grandson has to keep his £150 boots in the shed,if you complain enough they will give you a credit note for anew pair and then the problem cotinues.

A few drops of humanity in a sea of human demoniacal behavior with all the still-ongoing cruelty and killing. If it takes world wide bans and legislating, then may the bans against such cruelty and inhumane treatment be made everywhere.

A few drops of humanity in a sea of human demoniacal behavior with all the still-ongoing cruelty and killing. If it takes world wide bans and legislating, then may the bans against such cruelty and inhumane treatment be made everywhere.