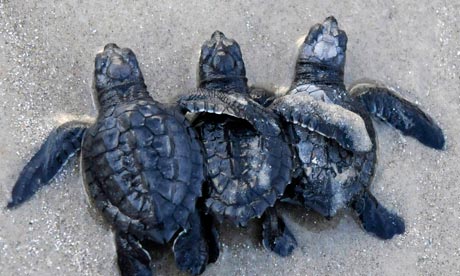 A Florida police officer saved nearly 100 baby sea turtles when he gathered the newly hatched creatures from a hotel parking lot and street and released them into the Gulf of Mexico. Sarasota officer Derek Conley was on patrol at 1am Saturday when he saw sea turtle hatchlings crawling toward the front door of the Lido Beach Resort. A passerby also told Conley that several dozen other baby turtles were walking around the hotel’s parking lot.

Conley, along with some resort guests, scooped up the hatchlings in a box and released them into the water.

“I began collecting hatchlings from the street and stopped traffic several times to do so,” wrote Conley in a report.

A news release says that Conley spotted three dead turtles, and he estimates that 90 to 100 turtles were saved.

Sea turtles nest from May 1 to October 31 in Florida. According to the Florida fish and wildlife conservation commission, there are five types of nesting sea turtles in Florida. All are protected under state statutes. Sea turtles make anywhere from 40,000-84,000 nests in the state each year.

The loggerhead turtle is threatened and the green and leatherback are endangered, but all sea turtles are protected by the federal Endangered Species Act and the Florida Marine Protection Act. It is against the law to touch or disturb nesting sea turtles, hatchlings or their nests.

Adult females nest every two or three years and lay several nests in one season. They emerge from the water to nest on the beach mostly at night. Nests average 100 eggs, which incubate in the sand for about 60 days, depending on the species.

The hatchlings usually emerge from their nests at night. Only about 1 in 1,000 baby turtles survive to adulthood.

According to biologists, sea turtle hatchlings are born with the instinct to move toward the brightest direction – on a natural beach, this direction is the light of the open horizon – which could be why the Sarasota turtles were headed toward the hotel’s front door.

Across the state, a number of parks, beaches and conservation groups run programs where nature lovers can learn about the turtle nesting and hatching phenomenon and even watch baby turtles – without disturbing them – as they emerge from the nests and make their way to the water.

This article was published by Associated Press in Sarasota and the Guardian UK.