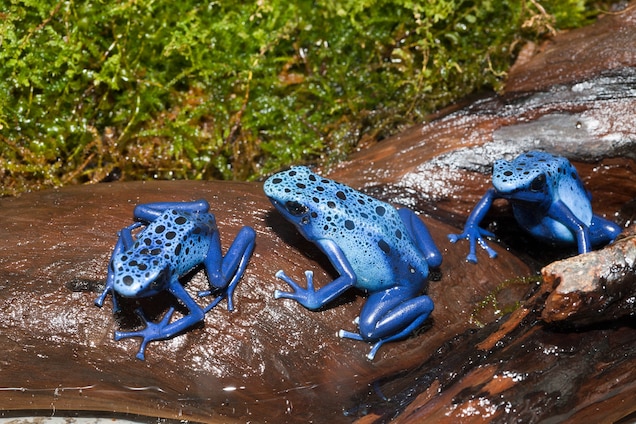 Deep in the forests of South America live poison dart frogs that carry around a toxin 200 times more potent than morphine. While it packs a fatal punch for predators, the poison doesn’t much affect the frogs. How?

Their nervous systems have changed over time to fight off the powerful chemicals—an extraordinary example of evolution in action, according to a new study.

“I’ve been wanting to understand how organisms could acquire neurotoxins, [which] requires an animal to reorganize their nervous system,” says study coauthor Rebecca Tarvin, a biologist at the University of Texas at Austin and National Geographic Society grantee. “It almost seems unlikely that something like that would evolve.”

Getting on Their Nerves

Poison frogs don’t actually make their own poison: They get it from eating mites and ants. Bright colors then warn any predator foolish enough to take a bite.

Predators such as snakes and scorpions, however, use venom, which must enter another animal’s body by physical trauma to properly work. These toxins don’t have to instantly kill: Instead, predators regularly use venom that paralyzes their prey.

In both cases, predators and prey alike want fast-acting toxins that can stop an animal in its tracks—making the nervous system an attractive target.

In fact, many of the animal kingdom’s most potent toxins target nerves in one way or another. (Find out how venoms could one day save your life.)

Some poison frogs carry a morphine-like compound called epibatidine, which works just like the compound acetylcholine, which sends messages between nerve cells. In fact, it works so well it can hijack the role of acetylcholine, wreaking havoc. Just one frog’s worth of epibatidine is enough to kill a water buffalo.

In contrast, some species of poisonous newt use tetrodotoxin, which clogs up a pore that’s key to conducting electric signals down a nerve.

“It’s like cutting the wire at a fragile place, but just cutting it with a different tool,” says Butch Brodie III, a biologist at the University of Virginia and poison expert who reviewed Tarvin’s study.

A Body Built for Poison

But how did poison frogs start using epibatidine?

After sequencing the DNA of poison frog species that employ epibatidine, Tarvin and her colleagues found that the frogs’ own receptors for acetylcholine were ever-so-slightly misshapen, results the team recently published in Science.

Genetically speaking, the change had to be subtle. Acetylcholine and epibatidine bind to the nerve receptor at the same place, so if mutations changed the receptor’s shape too much, acetylcholine wouldn’t be able to do its crucial day-to-day job.

But other structural tweaks across the receptor compensated for this issue. Epibatidine can’t “recognize” the poison frogs’ acetylcholine receptor, but acetylcholine can—sparing the frogs the effects of their own toxic brew.ance on at least three separate occasions, a testament to that mutation’s usefulness.

“This is beautiful… there is only a handful of examples [like Tarvin’s study],” says herpetologist and toxinologist Zoltan Takacs, a National Geographic Explorer.

“Whatever you uncover is a very rare insight into how evolution works and how neurobiology works.”

The study marks an important leap in the study of poisons’ evolution—but many mysteries remain.

For one, biologists still don’t know where poison frogs get epibatidine. It’s clear that it’s coming from something they’re eating, but scientists haven’t tracked down the source.

In fact, question marks surround most of poison frogs’ toxins. More than 800 compounds have been found in poison frogs, but fewer than 70 are well understood, says Tarvin.

Tracking down these toxins’ sources and learning more about how animals evolved resistance also offers insights that could hit close to home, says Brodie.

“We know very little about the chemical biosynthesis, in a lot of cases,” he says. “From a more human-concerned point of view, we’d do a lot better at combating these toxins if we understood.”