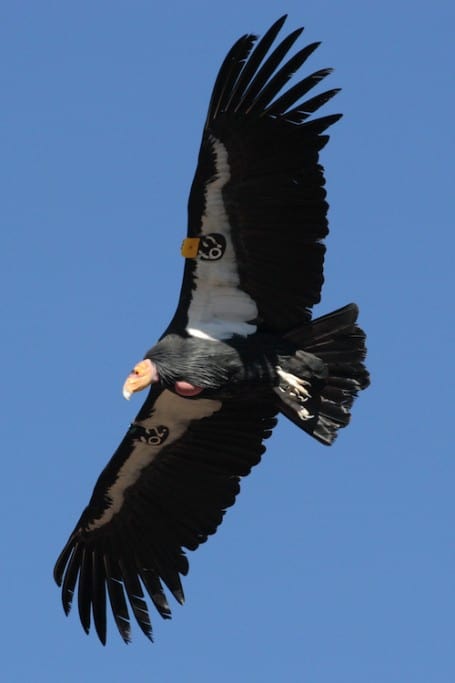 Here is another no-brainer for you. A new study authored by San Diego Zoo Institute for Conservation Research scientists has found that 67 percent of adult condor deaths are attributable to lead poisoning!

The massive effort to save the California Condor (Gymnogyps californianus) was initiated in 1982 when the remaining 22 wild birds were captured in a last-ditch effort to save the species. Of the 390 condors that exist today, 210 are in the wild, with 118 in California, 73 in Arizona and 19 in Mexico.

The American Bird Conservancy has analyzed almost 500, mostly peer-reviewed studies, and determined that the source of the vast majority of lead poisoning of birds and other wildlife is lead ammunition from hunting.

Darin Schroeder, Vice-President for Conservation Advocacy for American Bird Conservancy said, “Here we have another peer-reviewed study with independent scientists confirming that lead is needlessly and tragically killing protected wildlife. While the nation has removed the lead from paint, gasoline, children’s toys, water pipes, and even car wheel weights, we are still using toxic ammunition. Acceptable lead-free alternatives exist, and we need every hunter in America to make the switch to save the lives of countless non-game birds.”

Co-author of the study, Joseph Brandt, supervisory biologist for the U.S. Fish and Wildlife Service in Ventura said, “Here again, we are at another crossroads. We have a (wild) population established, and now we need to face down or correct the threats that we see the population being exposed to.”

Brandt didn’t know how much money has been spent on condor recovery efforts since the start, but he said investment by the federal government and its partners today tops $1 million annually.

Why can’t we ban lead ammunition in America? I mean, really? Is this a no-brainer or what?

We have spent the last 30 years trying to save the California Condor from extinction and doing a pretty damn good job of it, but we can’t get politicians to pass laws banning a poisonous ammunition that is not only killing condors but countless other species as well?

Here are a few related stories:

If you want to know which congressmen get the most kickback from the gun industry, check this out.

For more more up to the minute news on bird conservation issues, check my “Birds in the News” page, brought to you by the American Bird Conservancy. You will also find posts on local birds and birding in California on my blog The Birder’s Report, as well as my best bird photos on my Flickr page.

The EPA didn’t deny the petition because of mere pressure from the gun lobby. The EPA finally realized that they had no authority to regulate lead ammunition. I say “finally” because in an email I received from Michale Fry of ABC on August 2, 2010 (Subject: ABC Avian Vets and CBD file petition to ban lead bullets, shotgun pellets and fishing gear), he admits to meeting with EPA’s General Counsel before submitting the petition with CBD and writes, “We believe they have the authority to act, and in discussions with their General Counsel, they also believe they have the authority.”… Read more »

Maybe you didn’t read the first part of this post Dan. Let me fill you in on a couple of facts. 1) Among the collaborators in the study were the U.S. Fish and Wildlife Service, the National Park Service, the U.S. Geological Survey, the University of California at Santa Cruz and Davis, The Peregrine Fund, The San Diego Zoo Global and the Phoenix Zoo. 2) There have been a total of 135 endangered California Condor deaths from October 1992 (the date of the first death of a condor released back into the wild as part of the condor recovery program)… Read more »

Larry, this informative article raises many questions and has political ramifications. I was shocked that the Gun Lobby pays over $1.5 million dollars annually to Members of the House and Senate with approx. 90% overall to Republicans and 10% to Democrats. My questions are:

1) What is the reason why the EPA backed away from the Gun Control Issue last year?

2) How may of the 50 states have already banned the use of lead ammo and sinkers?

Well, Ken, the reason the EPA backed down from considering the ban in August of 2010 was a letter from the National Shooting Sports Foundation (NSSF) telling the Environmental Protection Agency’s administrator that they had no jurisdiction over ammunition. They were also pressured by the National Rifle Association (NRA) to back off. Being only weeks away from a mid-term election, the EPA decided to even cancel the “comment period” usually given to these issues. To quote a right -wing media outlet “Had the EPA pursued this in this electoral cycle, they would have risked inspiring a bipartisan effort to defund… Read more »

Seems to be a small irruption this winter in Scotland. More than normal sightings.
One seen in December in upper glen in Angus (East coast) Most unusual, but beautiful.
Whilst visiting Shetland some 15 or so years ago, I had ultra close up of one which had landed on a fishing boat in the North Sea, and was handed over to the local santuary to recover after its ordeal. My best birding memory.