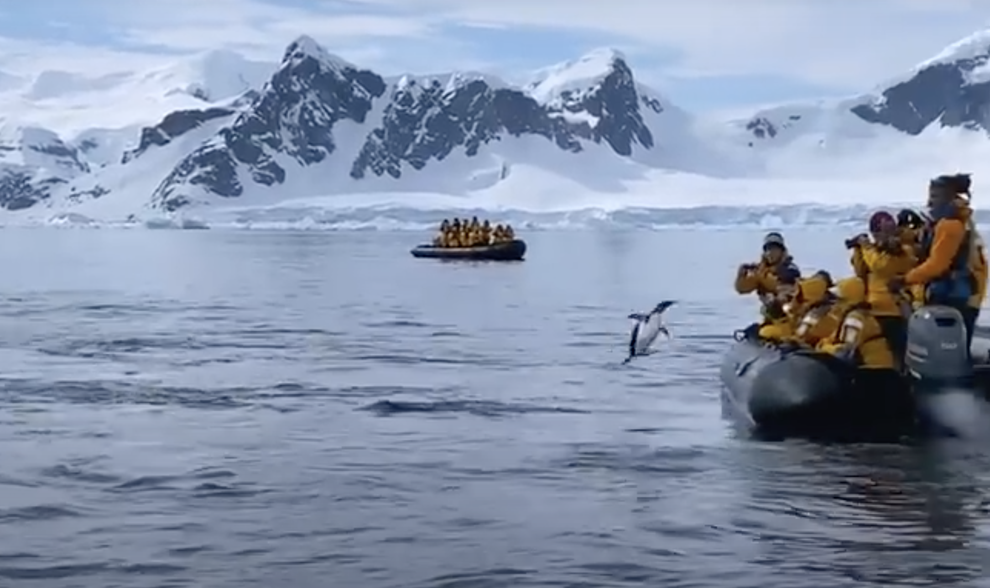 A penguin was captured on film escaping from a pod of killer whales by jumping into a boat full of tourists in Antarctica.

The extraordinary spectacle followed a dramatic chase in which the bird circled the tour boat and attempted repeatedly to leap out of the water to safety.

The frightened penguin was being pursued by a group of orcas in the Gerlache Strait as tourists on several dinghies watched on.

Mr Karsten said: “It was crazy to see in person. It was like watching a National Geographic episode on location. I imagine the penguin was very relieved to get away.”

The killer whales were in hot pursuit of the bird and it only narrowly made an escape on its second attempt to leap to safety.

The footage shows the penguin making it onto the rim of the boat, where it is helped onboard by tourists as the watching crowd cheers.

The boat, with the penguin inside, begins to move off but the orcas follow along behind. Someone in the crowd can even be heard suggesting the whales might also try to jump onboard the dinghy in pursuit of their intended meal.

The clip ends with the penguin standing proudly on the deck of the boat, safe from its attackers.

“After cruising for a little bit, the penguin said goodbye to the boat and hopped back into the icy water,” Mr Karsten said.

This article was first published by The Independent on 9 March 2021. Lead Image: The penguin made several attempt to jump aboard the dinghy (Expert Vagabond/YouTube).