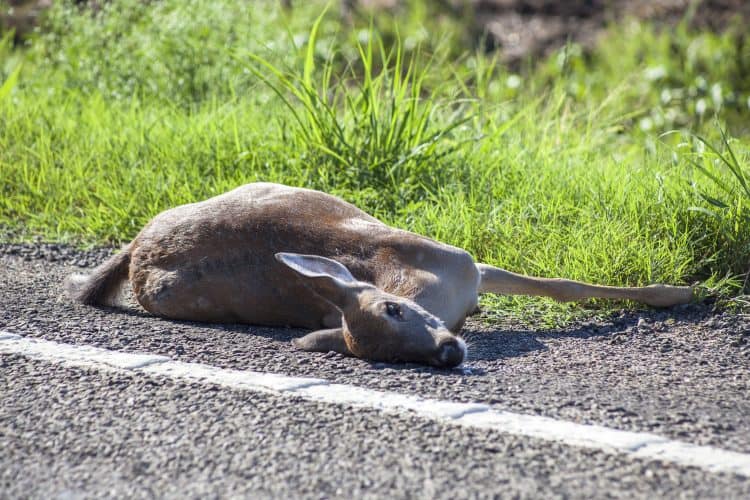 In Lethbridge, Alberta Canada, a gruesome scene took place resulting in the long and painful death of a deer. On January 5, a cop was caught on camera running over a deer several times.

The deer had been hit by a car and was left there for the police officer to find. He decided to run over the deer in an effort to put it out of its misery.

Erica Pritchard witnessed the deer get hit by a car, which broke its back legs. The deer was injured in the street when the cop arrived to the scene. With the officer’s black truck, he slowly accelerated and reversed over the suffering deer several times. The injured animal can be heard screaming in pain several times throughout the video.

The deer attempted to get up and hobble away from the road which shows there was hope for the deer. The injuries it sustained were too severe though, as it quickly fell to the ground, leaving the cop to conclude that he should continue to run it over until it officially died.

It’s a disturbing video to watch as Pritchard says: “I figured that’s not what you’re supposed to do. Hearing the deer screaming every time he ran over it was shocking.”

At the end of the video, the officer leaves his vehicle and drags the deer’s carcass off the road. He then enters back into his truck and drives away.

In similar situations, law enforcement often kill the deer as quickly and quietly as possible. According to Best Practice Guidance, the preferred method of dispatch is to use a firearm, and other common methods include use of drugs, a captive bolt, and a knife.

They also state that “the aim of the dispatcher should be to carry out a single action resulting in rapid loss of consciousness and death, without causing unnecessary suffering.”

Clearly, none of those methods were used and the deer suffered a great deal over a significant period of time.

When asked if running over a suffering animal is part of the training officers in the department receive, police Chief Robert Davis said “no,” and that is part of what is being looked at in the investigation conducted by the Alberta Serious Incident Response Team.

This impractical method used by the officer was cruel, and Pritchard is not the only one who has taken issue with it.

If this story or the video also makes you feel “really sick,” or you simply don’t believe that this officer should walk free, sign this petition to demand he be terminated. Situations like this serve as a reminder that it’s time to re-asses what is considered to be animal cruelty.