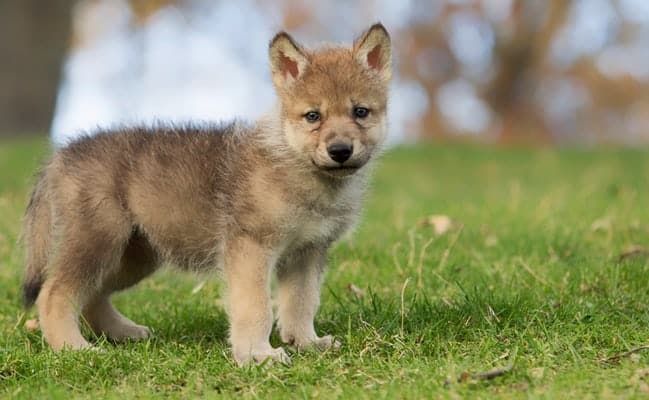 When you visit a petting zoo– or any facility that claims to promote conservation education — you expect that the animals will be well cared for and live long, happy lives. But, sadly, this is not always the case.

Animal rights groups say that the animals at Fur-Ever Wild in Lakeville, Minnesota — including cougars, bobcats, lynx, foxes and gray wolves — are living in inadequate conditions and ultimately being killed for their pelts.

Perhaps unaware or indifferent, visitors flock to Fur-Ever Wild for cute photo ops of their kids playing with wolf cubs and fox kits. And the gray wolves are the star attractions.

You can see the wolf pups on display at the Elko Speedway in this video:

Visitors seem more than willing to trade $20 for 20 minutes that might fetch them a special picture to post on Facebook. They probably have no idea that the pelt or teeth of that same cute cub will possibly be for sale in the gift shop in a year.

So why is it that Fur-Ever Wild can kill gray wolves with impunity when they decide they want to?

The ESA prohibits the “taking” of listed species, which means that no one can “harass, harm, pursue, hunt, shoot, wound, kill, trap, capture, or collect, or to attempt to engage in any such conduct.” It is illegal to sell, offer to sell, transport, ship, carry, deliver or receive any Minnesota gray wolf in interstate commerce. It is also illegal to possess, sell, deliver, carry, transport or ship a gray wolf or her parts.

The exception to these prohibitions is the incidental take permit, which allows a person to take the gray wolf “incidental to, and not the purpose of, the carrying out of an otherwise lawful activity” or “for scientific purposes or to enhance the propagation or survival of the affected species.”

But the complaint alleges that Fur-Ever Wild doesn’t have such a permit.

Fur-Ever Wild owner Terri Petter has previously acknowledged that her business is primarily a fur farm. When asked which of her animals are raised for fur, her answer was — except for the goats and pigs — “They all are.”

In hopes of stopping this practice, the Animal Legal Defense Fund (ADLF) and the Lockwood Animal Rescue Center (LARC) filed suit against Fur-Ever Wild on September 29, 2017 in federal court in Minneapolis. The complaint alleges that Fur-Ever Wild violated the ESA by killing threatened gray wolves, selling their body parts and providing inadequate care to the animals.

Fur-Ever Wild makes the public pay to feed the animals housed in its facility. According to its website:

We are NOT an animal exhibition. Everyone that comes on the weekends must volunteer and help feed the animals. You pay for what you feed.​ Chicken, ribs, deer legs (road kill), hot dogs, grain, apples, carrots, kibble, and more.

Essentially,the public pays to help keep the animals fed, and Fur-Ever Wild later kills and pelts them for profit. But Fur-Ever Wild’s web page conveniently says nothing about the animals’ ultimate fate. According to the ADLF/LARC lawsuit’s complaint:

Unbeknownst to most visitors, Fur-Ever Wild kills the gray wolves in the winter after the puppies grow too old for the pet-n-play visitor interactions. Fur-Ever Wild pelts the gray wolves and other animals to profit from their skin, skulls, teeth, bones, and other parts sold on-site at the facility’s gift shop and off-site events. As Ms. Petter admitted in a deposition related to another lawsuit: “I pelted two wolves last night. . . . And there is another two going tonight . . . There will be 25 within the next three weeks – two weeks.”

The facility apparently uses a lot of volunteer help to prepare food, clean, socialize the animals, build enclosures and more. And visitors complete these tasks for free just to get up close and personal with wild animals. Little do they know that they’re helping a fur farm do its heartless job.

Just after filing suit, LARC, a sanctuary with a focus on wolves, explained on its Facebook page:

Our fight for wild wolves . . . led us to Minnesota where we encountered one of the worst scenarios we have ever witnessed – Fur Ever Wild. LARC sent a letter offering to bring the wolves to our sanctuary for a new life far from the risk of being electrocuted and skinned. Fur Ever Wild chose to ignore this letter and continues to kill wolves. It became clear that the only way to save these wolves would be to remove them from Fur Ever Wild.

But problems with Fur-Ever Wild are not new. In fact, the ADLF alleges that neighbors previously filed a lawsuit complaining about noise, safety and the facility’s odor.

“If the breeze is going back and forth, coming from the south or southeast, the stench is pretty steady,” nearby resident Bill Funk told City Pages in 2016. “Best way to describe it is between the rotting flesh of a dead animal and a landfill.”

In August 2015, the local township also filed a lawsuit claiming that the facility violated a local exotic animal ordinance forbidding ownership of this type of animal.

So far, Fur-Ever Wild has managed to keep its doors open, but perhaps this latest lawsuit will change that.

“Fur-Ever Wild isn’t what Terri sells to the public,” Funk told City Pages. “You can hear it if you listen to her wolves. I’ve heard wolves howl in the wild. I can tell you Terri’s wolves don’t make the same sound. There’s a different tone to it. These wolves, they’re sad.”

This kind of “petting zoo” should not exist. It’s frankly outrageous that Fur-Ever Wild can get away with profiting from putting a protected species on display and later killing it for even more profit. The Endangered Species Act exists for a purpose, and it should be respected and enforced.

Urge the U.S. Fish and Wildlife Service to shut down this illegal wolf fur farm by signing this Care2 petition.

We invite you to share your opinion whether “petting zoos” displaying wild animals should be closed down? Please vote and leave your comments at the bottom of this page.