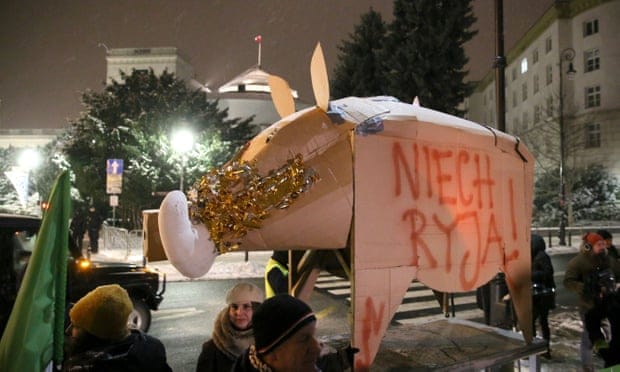 Conservationists have branded plans by the Polish government to cull almost the entire wild boar population of the country as “pointless, counterproductive and evil”.

In a move to tackle an epidemic of African swine fever, the Polish government has ordered a series of hunts, beginning this weekend, with the aim of killing the vast majority of the country’s population of around 200,000 wild boar.

Last year, the country’s veterinary officials approved a plan to kill 185,000 wild boars this season, and the country’s PZL hunting union said it had already killed 168,000 since last April. The government has recently decided to speed up the process by calling all licensed hunters to go out seeking wild boars, including pregnant females, over weekends this month.

Opponents of the cull said it is not only cruel but pointless, or possibly even counterproductive.

“The massacre of wild boar in large-scale hunts will not stop [African swine fever], it will only help the spread of the virus to western Poland,” said an appeal by environmental organisations to the government to abandon the plan.

Mikołaj Golachowski, a biologist and conservationist who has been outspoken about the government’s plans, agreed that the cull was merely likely to disperse the animals rather than eradicate them entirely, risking spreading the disease further afield.

Golachowski said killing the animals would also cause enormous damage to the country’s ecosystem. When wild boars forage, they aerate the soil allowing seeds to germinate and also feed on rodents and insect larvae, meaning their absence could lead to an increase in these populations.

“They are a very important part of the ecosystem, and there is also the ethical question of slaughtering innocent animals for something that is not going to achieve any purpose. In every aspect it’s a terrible idea, and it’s also evil,” he said.

Poland is a leading exporter of pork products, and African swine fever can prove deadly to pigs and wild boar, though it does not infect humans. It can also be spread by insects and can survive for several months in carcasses and processed meat. There are no known antidotes or vaccines. However, critics said proper biosecurity measures involving special sterilised clothing and mats at farms would be a more effective way to avoid the spread of the disease than mass slaughter.

“It’s a political problem. Biosecurity is the only answer but it’s hard and costly. The government, being such a populist one, wants to fight for the votes of farmers,” he said.

Environmental groups, keen to show the government that there are other voters who strongly oppose the plans, have organised a series of street demonstrations and online protests against the cull.

Several thousand Poles have changed their Facebook profile picture to one of a wild boar, while an online petition to the government asking it to abandon the slaughter has received more than 300,000 signatures.

On Wednesday evening, hundreds of protesters took to the streets in Warsaw, some dressed as wild boar, holding signs that included “wild boar massacre” and “long live wild boars”.

This article was first published by The Guardian on 11 Jan 2019.

We invite you to share your opinion whether the entire wild boar population of Poland should be culled? Please vote and leave your comments at the bottom of this page.

Once again innocent animals will suffer due to man’s greed, inhumanity and lack of moral ethics. Lets blame the boar because the ‘farmers’ cannot be bothered to look after their animals properly, perhaps if the farmers got off their fat, lazy butts and did their jobs properly there wouldn’t be mass infections spreading through livestock. Just like the British farmers blaming the badgers for their bad housekeeping with the cattle….still its easier to go and kill innocent animals than it is to ‘farm’ properly and decently. Still POLAND is not exactly known for its treatment towards most animals especially dogs… Read more »

Shades of the badger syndrome in the UK. Its political. Got to keep the farmers sweet!

Yet another example of wildlife paying the price for bad farming practices.

Boars are boars but humans are boorish swine